The Natural Course of Things 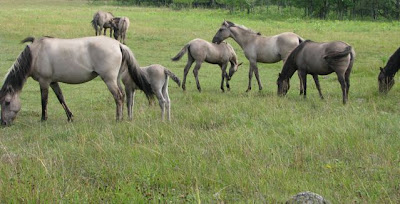 Tourist season is winding down, August has begun trying on September's clothing and I still am unable to devote the necessary time to writing journal entries dedicated to the mares, as promised, or give the virtual museum tour of the art exhibition many requested and also I know many are wondering if Encantara, Animado and Segura made their trip to Cheyenne, Wyoming to begin their new life with the Olson's at their Soul of Sorraia ranch. Next month we will do the mare articles and take you on the virtual art tour, but for now, at the very least (before this summer month completely ends without any journal entry whatsoever!) I thought I'd better steal some time at the studio to provide an update on how things have been going here at the Ravenseyrie Sorraia Mustang Preserve. 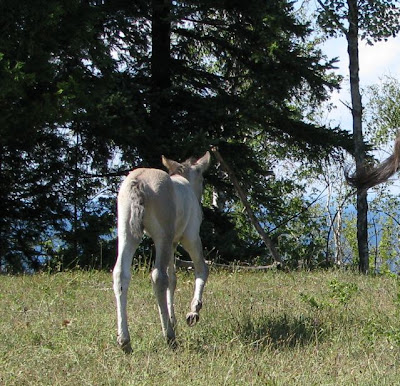 Altamiro (our amazing Birdchaser) has been recovering from a ligament injury since June 1st (story of this in a future entry) which slowed him down, but did not keep him from tending his harem stallion duties. Though it took awhile, he is almost completely back to his usual vigorous self.

Our Manitoulin Island summer this year has been unusually humid, with quite a bit of rain and high temperatures causing the horses to most of the time stay hidden in the forest during daylight hours and reserve grazing times for the early mornings and evenings. The biting flies have been like a plague and keep the horses is perpetual motion even as they while away the day in their chosen shady groves. It must feel like heaven to them when it rains! 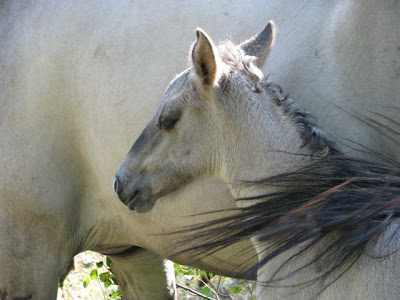 Zorita's filly, Levada, takes advantage of her mother's tail during a rough day of being pestered by flies 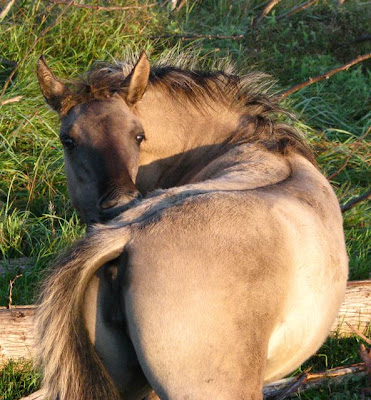 Quite some time ago, Kevin completed the special fencing in of a "holding pasture" which ties in to the old cattle sorting corral, where he also erected a run-in shelter. When it comes time to bring in off the range those youngsters destined to live away from Ravenseyrie, they will receive their veterinary inspections and more formalized halter training in this segregated space while they await transport to their new lives. 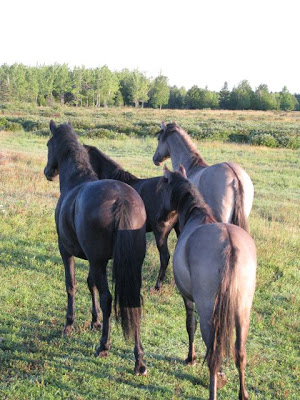 Here we have (back to front) Encantara, Interessado, Fada and Animado, the four half-Sorraia youngsters who were expelled from the family band and now run with Mistral's group. 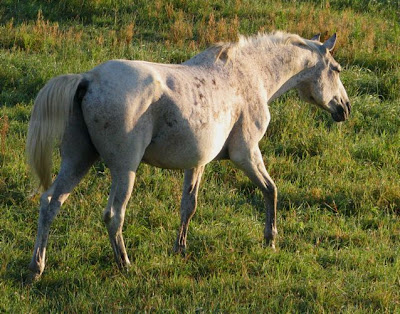 Those who have checked out the "offspring sold" page at the top of this blog will know that Mike and Sheri Olson of the Soul of Sorraia ranch in Cheyenne, Wyoming where expecting to come pick up Animado, Encantara and Segura in mid-July. However, there is one unanticipated delay...Altamiro has not yet expelled Segura from the family band.


Typically these natural weanings have occurred at Ravenseyrie when the fillies and colts approached their first birthdays. In 2009, Animado and Interessado were hazed out of the natal group, but Fada left on her own. Early this spring, when Encantara was only ten months old, Altamiro hazed her (quite roughly) until she was convinced that he would no longer accept her presence in the family band. 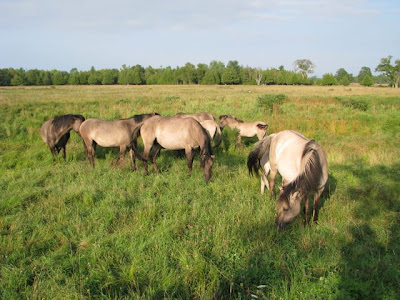 We would have expected Silvestre and Segura to have been ousted by now and joined up with their half-siblings who run with Mistral's group, but so far, there is no sign that Altamiro is contemplating a shift in herd dynamics.

Ravenseyrie is not presently set up with the type of infrastructure which allows for more than one holding area, and the one that we have cobbled together is located on the east side of the house and yard which Altamiro considers to be the camp of Mistral's group and therefore will not allow his family to go near this sector. While it is possible that we could lure Segura and Silvestre into our yard, in the likely event that they and other family members panic at a forced separation, the area is not sufficiently secure or safe from potential mishaps. 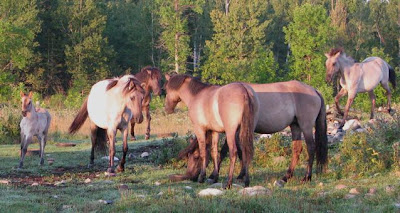 I had been mentally and physically cramped up inside, finding sleep difficult and the future tenuous to think that we might miss this opportunity with the Olson's and the more I contemplated trying to make things happen so that we could have everyone ready to go by the end of July, the more it felt "wrong". Both Kevin and I decided to not force the situation, but instead wait for Altamiro's proper timing, whatever that may be.

Leave all things to take their natural course, and do not interfere. --Anonymous (from the book A Little Treasury of Chinese Wisdom)

Thankfully, the Olson's feel the same way and are willing to wait for things to "take their natural course", even if it means that the coming of winter will postpone them bringing the youngsters home with them until next spring. 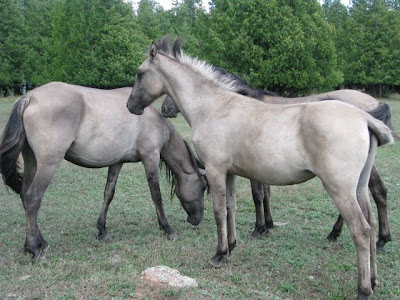 There are positive aspects to this postponement, one of which is that when the leading authority on Sorraia and Sorraia Mustang horses, Hardy Oelke, and his wife Rose come to Ravenseyrie in early September, they will be able to see all the primitives in the setting which they were born.

Meanwhile, I get to enjoy these wonderful young horses a little longer. I'm certain things have transpired the way they have for a special reason and though I do not know what the future holds, I continue to recite my personal affirmation: "believe in goodness prevailing."
Posted by Lynne Gerard at 4:34 PM 22 comments: