Our preservation effort for the Sorraia and Sorraia Mustangs may no longer involve monitoring the fascinating seasonal habits of a family band, even so there remains still enough excitement in the spring to keep the mare group and the bachelor group in high spirits and feeling that their days and nights are filled with interesting elements.

Kevin and I miss having the mares right here at Ravenseyrie, but are so thankful to have them living at the alternate range, Twinravens, which is the property belonging to the Ojibway artist, Mark Seabrook and his multi-skilled wife, Michelle Hrynyk.  They are a wonderful "host" to our mares and I treasure my Mare Mondays, when I have the Ravenseyrie gallery closed and can make the hour drive down to see all the "ladies" as Michelle calls our treasure trove of "wild" females.

While it is true that Kevin and I miss the rare opportunity to see a family band of wild horses living out their lives up on the East Bluff, we definitely do not miss all the violent activities that had become so prevalent once the offspring of Altamiro and his mares came of age - too much testosterone on too little acreage made for unnatural territorial pressures with no relief.  I've written enough in other journal entries about why we shifted our focus in this preservation effort to safeguarding what we already have rather than continuing to allow reproduction to exceed our capacity to oversee things, so for now let's put away all those serious matters and look at some recent photos instead. 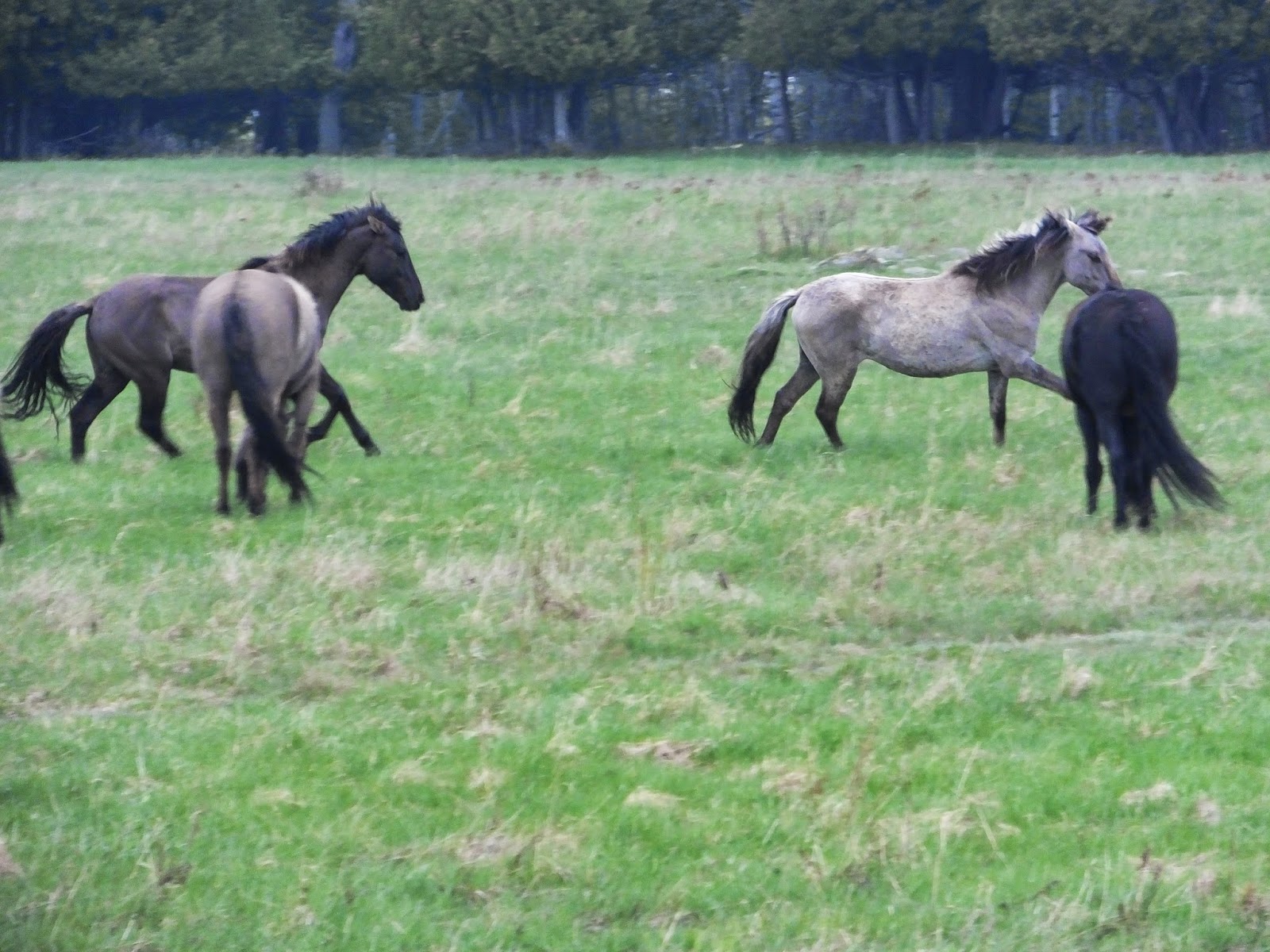 So much for the boy games taking place at Ravenseyrie.  Young mares can be as lively as young stallions!  Let's go now to Twinravens and see!

"In play we find ourselves, for a certain time, in another world, beyond our everyday cares and conflicts; in a space where normal power relationships no longer apply, and even battles are fun, simply because we are playing.  We are only pretending when we fight.  What happens here does not become disastrous as in 'real life'."
--Imke Spilker from EMPOWERED HORSES
Posted by Lynne Gerard at 12:51 PM 1 comment:

In my Grey and Green journal entry, Eva left some queries for me in the comments section.  I thought it would be fun to answer those queries in a new journal entry where I could go into greater detail and provide some photos as well...so here we go!

"I am intrigued by your seal.  What does it mean?  Did you carve it yourself in Jade stone?"

Eva's interest in this seal gives me an opportunity to provide some background to how it came to be...

You could say it began a number of years ago, when Kris McCormack (a mutual friend to Eva and me) sent me several lovely marble covered sketch books, (made by Michael Roger Press, New York) and also a year or so after that she gifted me with another sketch/journal book made in Nepal, imported by Savoir-Faire.

In the marble covered sketch book I work on charcoal drawings:

In the Nepalese sketch book I make ink wash studies for images I am working to incorporate into my Paleolithic style rock paintings:

One day last summer I was looking through these sketch books and thought a number of the sketches were interesting enough to sell in the gallery.  Working most of the time in watercolours, it seemed to me that maybe these charcoal drawing and ink wash sketches were too monochromatic to hang aside more colourful images.  It was then I wondered if maybe a simple red seal would strike a good balance and push the sketches more toward finished art.  I discovered via the internet that there were several companies who would take my name and convert it into Chinese calligraphic characters and carve me a seal (chop) in jade stone.    Though I am, myself a calligrapher, my lettering is done with English characters of course and I don't feel I've earned any right to use a Chinese seal for the type of things I create, even if they sometimes have an Asian feel to them.  I had read that James Abbott McNeill Whistler had made himself a stylized signature seal to stamp on his paintings and thought it might be something I could attempt as well.

I knew I would not be able to carve in stone but maybe I could make a rubber stamp for my seal/chop?  I had no idea where to begin, so had to do quite a lot of research on the internet (a real help when you live on a rather remote island!) and then order some supplies.  While waiting for the supplies to arrive, I worked on drawing up a design that incorporated my initials along with some of the goddess symbols I use in my rock paintings.  I tried many different variations and had to redesign time and time again because I was unable to reproduce some of the designs appropriately once I began to carve them into the rubber.  It was so difficult, in fact, that I thought I might give the whole idea up.  But I kept at it and finally found a finished design that seemed to work and looked appropriate with the ink wash sketches.

I also carved a stamp of my raven motif which was much easier than the signature seal!  I mounted both of them on small tile-like stones I collect from the Ravenseyrie beach along the North Channel of Lake Huron.

The symbols I used in my chop are a "meander" and a "chevron".  These are described well in a scholarly book by Marija Gimbutas, THE LANGUAGE OF THE GODDESS.  The meander is probably most well know as the "Greek Key" motif, but Gimbutas discovered these images on artworks from the Upper Paleolithic and felt they were symbols used by the goddess cults of Old Europe.  For her the meander symbolizes flowing water and was most associated with the bird goddess.  The chevron is a "V" and denotes the female pubic triangle and like the meander was most often associated with water birds and the bird goddess.


Here I have used these symbols on a rock paining I did to represent a bird goddess:

Here I have used the meander and the spiral (infinite energy) along with a Sandhill Crane for another rock paining:


Curiously, I cannot bring myself to cut any of the pages out of my sketch books, so I have begun to do ink washes on other paper and then mount them as hanging scrolls or on matte black paper in a black frame.

I have yet to do anything about using the seal on charcoal drawings because I haven't made any that are not in the sketch book.  A project for another time, perhaps!  The abstract watercolour in the Grey and Green journal entry is the first time I used the signature seal chop (along with the raven chop) on anything other than an ink wash painting.  It seems to work nicely there, too, but I am showing restraint and not putting it on my other colour paintings...but maybe I should?

The Warmth of the Sun 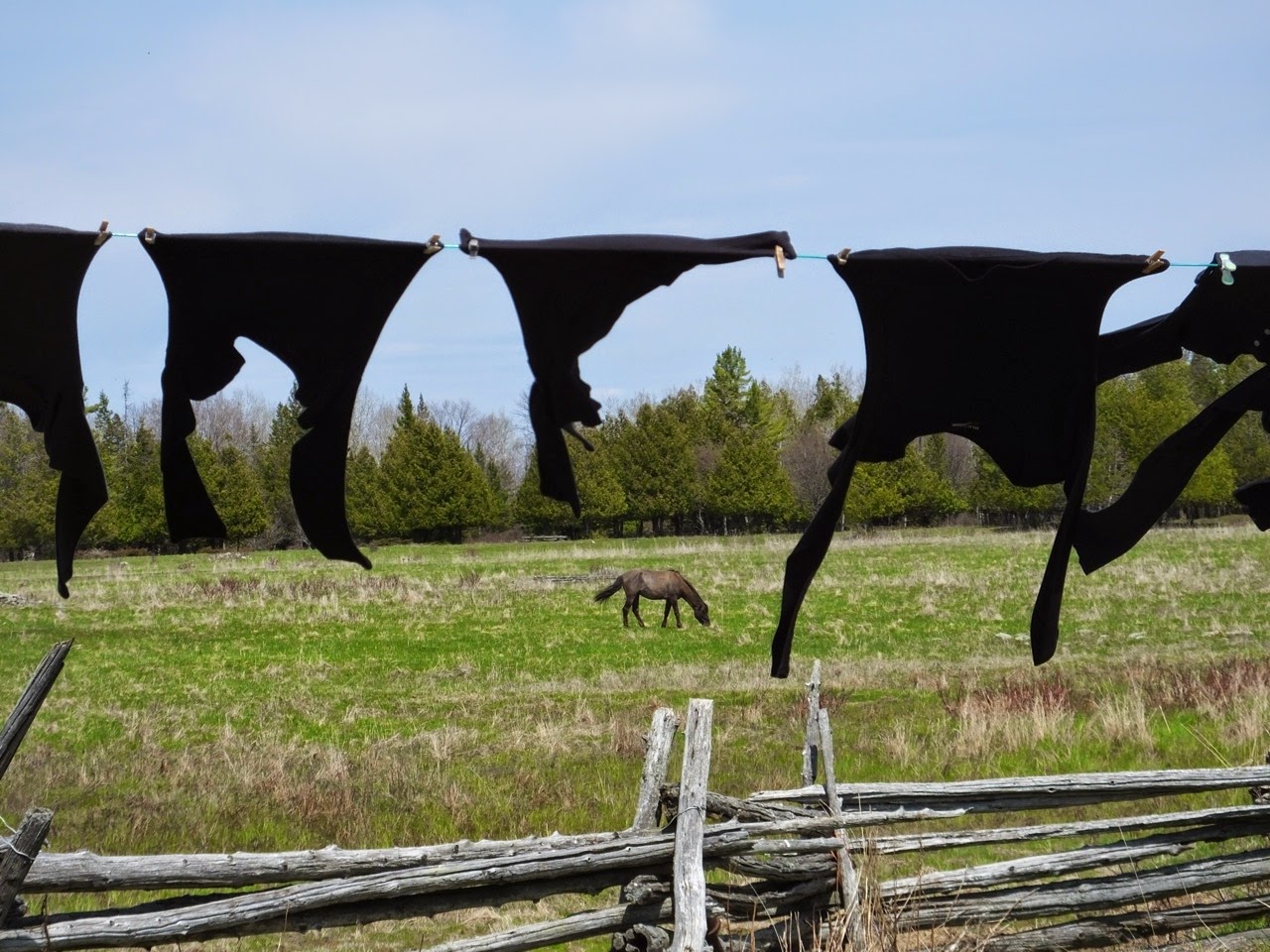 After so many days of grey and green, a blue sky and the warmth of the sun feels absolutely sublime!
Posted by Lynne Gerard at 9:50 AM 3 comments:

Space to Fly, Room to Run 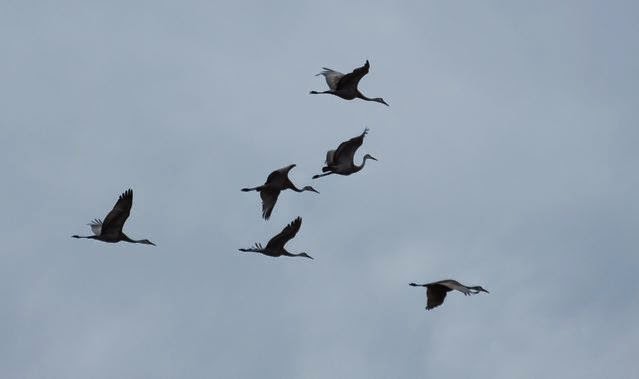 This morning it was blustery, rainy and magically inviting.  Green rubber boots, yellow slicker, plastic bag over my camera - out went I...

The bachelors were moving from one windbreak to another, having to make a dash straight into the wind driven rain.  Probably it is crazy to try to take photos in the pouring rain!  But the scenes were such an exhilarating mix of energy mingling with tranquil, subdued colours, I had to try.  Most were improperly focused...but the feeling nevertheless was captured, maybe all the better for it. 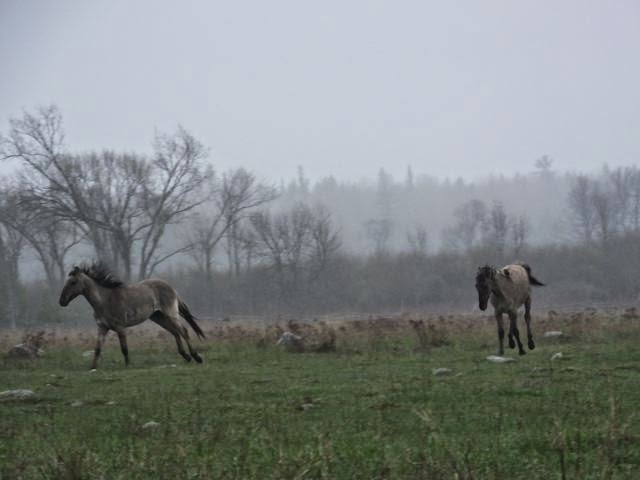 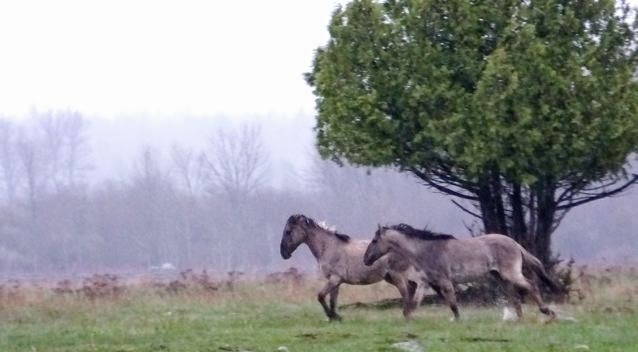 All around there is space to fly, room to run.  How thankful I am to live in a place such as this, and share it with this bachelor group of "wild" horses. 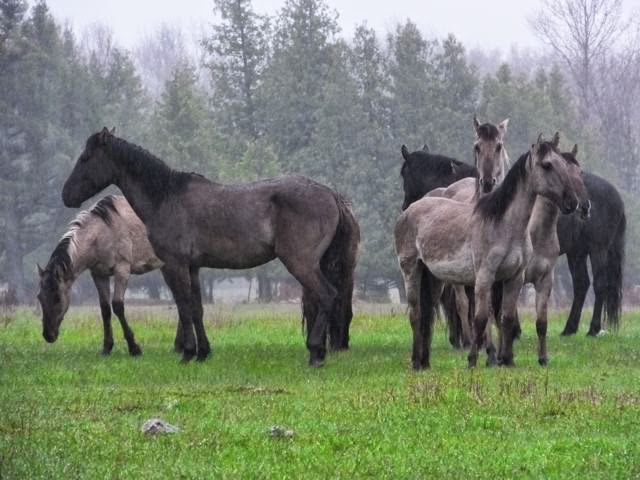 "People by and large have been kind to horses when it served a human purpose, but when kind treatment did not serve a human purpose, treatment has been sometimes unspeakably cruel.  History teaches us about horses, but it tells more about the nature of humans."
--J. Edward de Steiguer 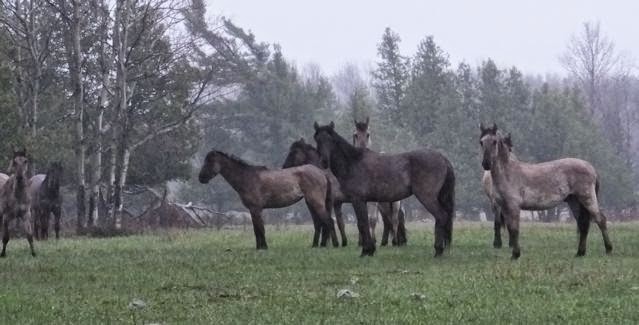 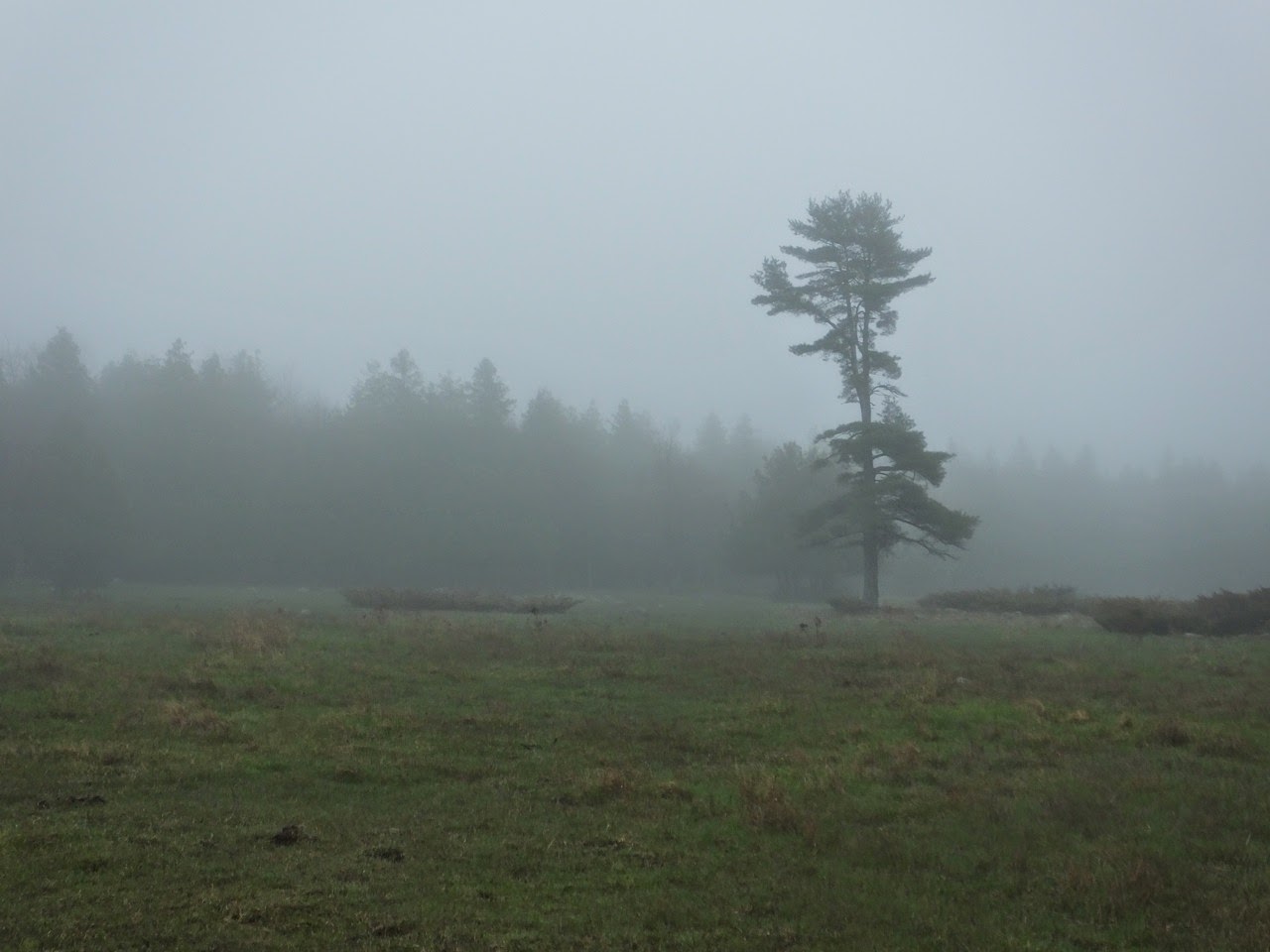 "Colour is all around us, it is a very powerful and exciting part of our lives.  Everyone responds to colour.  Usually it is the first thing we notice when we look at an object or a scene: we react to the sensation of colour before we are fully aware of shapes and other qualities."
--Alvaro Castagnet

Spring green has such a jewel-like quality to it!  The contrast of that green with the grey of an evening fog had me out roaming the landscape one more time before nightfall. 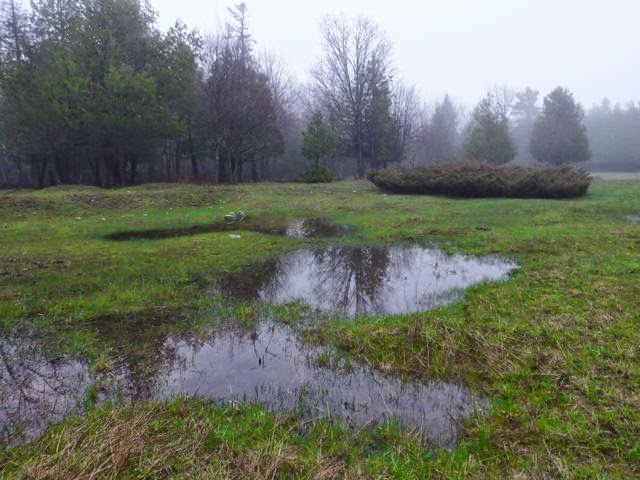 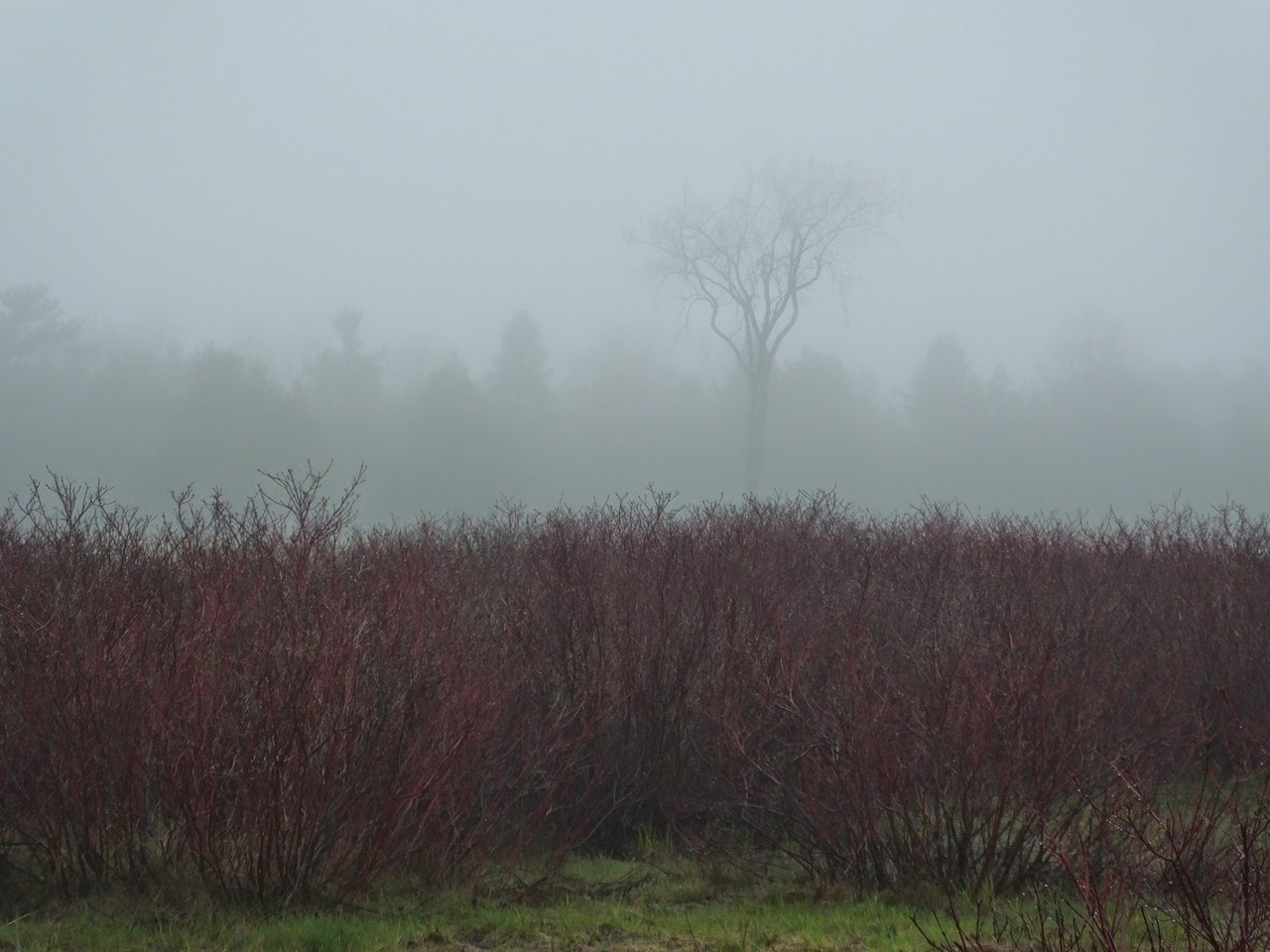 I found the horses grazing in the southeast sector of the preserve.  Only a few lifted their heads to appraise my approach...mostly I was completely ignored.  At that moment in time the drug of the emergent greenery held much more meaning for them than a possible caress from their friend, Lynne.  I felt drugged myself by the atmospherics...grey and green, the damp chill air, the sounds of eager eating and those lovely, lovely forms. 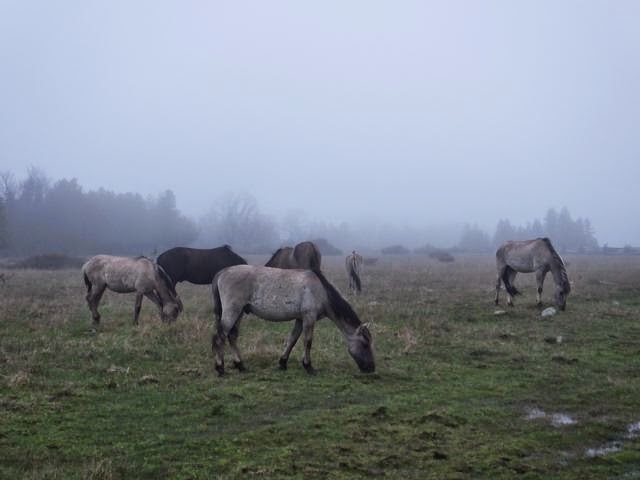 "Colours are living entities - as much as the wind, or flowers, or you and me.  Like fragrances, like music, colours can pierce the heart, expose the soul and uplift the spirit - such is the magical power of colour."
--Lynne Gerard 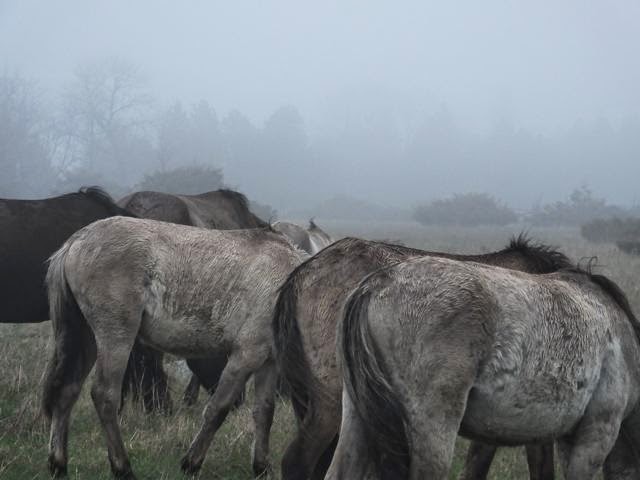 Romance is All That is True

"One thing that never gets emphasised enough in science, or in schools, or anywhere else, is that no matter how fancy-schmancy your statistical technique, the output is always a probability level (a P-value), the 'significance' of which is left for you to judge - based on nothing more concrete or substantive than a feeling, based on the imponderables of personal or shared experience.  Statistics, and therefore science, can only advise on probability - they cannot determine The Truth.  And Truth, with a capital T, is forever just beyond one's grasp."
--Henry Gee

"To a child all the different colours are a romance, and romance is all that is true."
--Robert Henri

Somewhere between these quotes from Henry Gee (senior editor for the scientific journal Nature) and painter Robert Henri (1856-1929) persists the most important essence of what it has meant and continues to mean to live my life among Sorraia horses.

As we enter the 9th spring of our involvement with the preservation of the "Iberian Tarpan", what gallops across the landscape "here and now" is what is much more worthy of my energies, than attempting to piece together inherently unreliable historic and scientific research.

"It is not a matter of 'going back' to an earlier way of life, but of aligning ourselves with the full depth of the present." --David Abrams 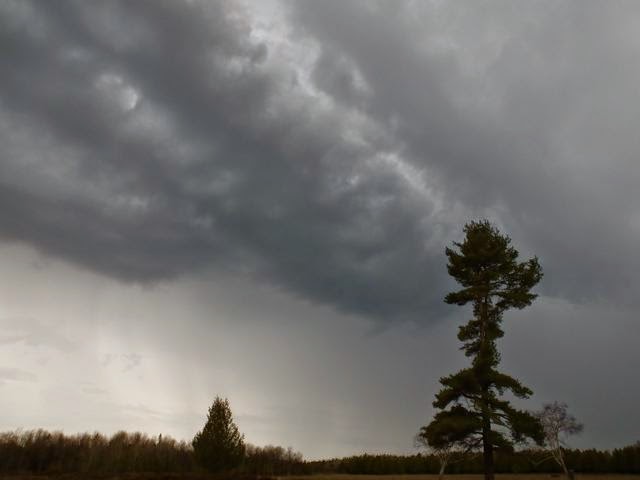 The most recent thundershowers, followed by high winds seem to have fully released the landscape from the oppression of winter.  And now the greening begins!  How ebullient the horses are!  Some kept a condition of good flesh during the toughest winter I've ever experienced, others will be filling back in nicely now that rich early grazing is presenting itself almost everywhere.  Perhaps the muse who inspires me to write in this journal will return...until then, I believe I will simply offer up daily photos - some from Ravenseyrie and some of our mares who are living down Tehkummah way at Twinravens.  The Journal of Ravenseyrie blog is not dead!  We just are gaining a feeling for what winds will now be blowing...so much has changed, nothing seems the same... 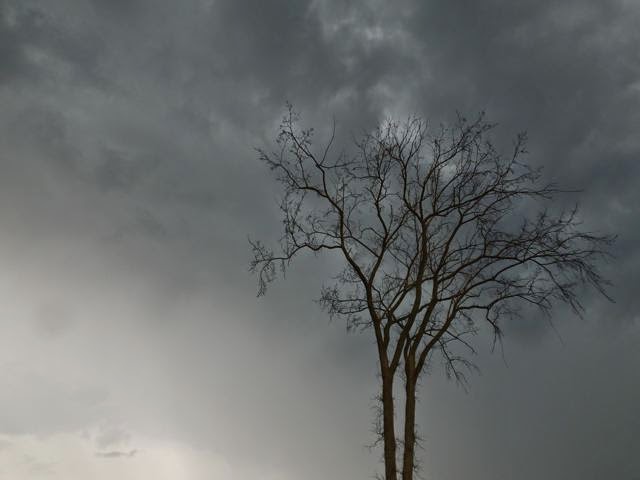