Perhaps the title of this journal entry conjures up an image of a mounted Sorraia stallion performing a  Doma Vaquero spin?  It is unlikely that readers would be thinking this author used such a snappy title because she wishes to share with you her exploration of learning how to make yarn from the shed winter undercoats of the "wild" Sorraia horses of Ravenseyrie, but it is so!

While I have been making a living off the arts since I was twenty-four, it wasn't until thirty years later that I showed any interest in the fibre arts.  Both my mother and sister are competent seamstresses and crocheters (in fact my mother hand makes much of the clothing I wear) but I never had an interest in taking up those skills myself.

In the autumn of 2014, during a little family reunion, I asked my mother if she would teach me how to crochet...

It was very hard - she being a right-handed adept, and me being a left-handed complete foreigner to this useful art - but I was very determined to learn and she was most patient with my remarkable clumsiness of mind and body.


When the two days were over, I had gained control over the first rudimentary stitches and felt like I had achieved the most amazing feat!

Back home on Manitoulin Island, I found an exciting world of crochet tutorials on YouTube, some of which were filmed for south-paw folks like me. I immersed myself in this new world of learning with as much excitement and anticipation as one feels when falling in love.  In fact I did fall in love, with crochet and with fibre itself.

Falling in love with fibre had me thinking how splendid it would be to be able to collect the shed winter undercoats of our Sorraia horses and turn them into yarn.  I sure didn't know how to do this, or even if it could be done...


This past winter, there was a knitting class being held on the lower level of the Gore Bay Harbour Centre (the building I lease second floor space in for my Ravensyerie Studio & Art Gallery).  Those nice ladies had invited me down to crochet while they were knitting and during one of these sit-ins, I shared my desire to experiment with making horse hair into yarn.  It was my good fortune that the instructor of this class (Deb Colville) was once a sheep farmer and said she would be happy to teach me how to spin yarn.  While Deb, herself, had never attempted to spin horse hair - nor did she know anyone who had attempted it, she believed it could be done if blended with a longer fibre, like sheep's wool.


I had some tremendous difficulties with this Leclerc wheel (Deb called it "The Wheel From Hell") and it soon became apparent despite someone's repair efforts, something remained wonky.  While I continued to tinker with it, hoping to discover the secrets to getting it to spin true, I asked Deb if maybe I should try learning to spin on a hand spindle.  "Those things should be banned!" said my feisty teacher.  Turns out that when Deb was learning to spin, she took more readily to the wheel than to a hand spindle and recounts dreadful tales of being made to stand on a ladder while trying to spin fleece into yarn on a drop spindle.  Left to my own devices, I immersed myself in the study of spinning yarn on spindles, consulting books and YouTube videos.   I made myself several crude drop spindles and learned the "park and draft" technique which finally helped things "click" in my body and mind allowing me to gain feeling for what it takes to create yarn.

As winter progressed, my good teacher would bring me raw fleece from her last remaining sheep (Buddy) and I practiced and practiced and practiced.   Sometimes Deb and those nice ladies from the knitting group would present me with "mystery fibres", and I would spin them, too.  I have experimented with naturally shed fibres from rabbits, dogs, cats, alpacas even Whitetail Deer hair!  I dutifully (and joyfully) spun on both the hand spindle and the Leclerc wheel - which I named "Madame" and found the secret to her lovely French moods - and I crocheted a "sampler" poncho with my "beginners yarn", all the while waiting for winter's end to prompt the shedding of our "wild" horses' undercoats. 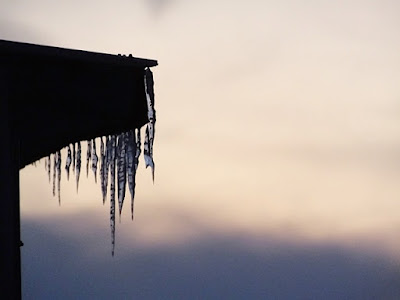 While last winter's snow was flying, intrepid shoppers would occasionally come to my Ravensyerie gallery and I earned enough money to order myself a set of hand carders (from Wingham Wool Works) for preparing the fibres.  How much better these work than my single 4" dog brush!  I also ordered some prepared fibre (roving) and a hand spindle from Alice Bernardo at Saber Fazer after being deeply moved by the way the Portuguese spin wool from their sheep.  (Dona Benta, in particular is like a goddess to me the way she spins off a distaff, so much like a classical musician playing an instrument!)  I spent the long winter evenings near the wood stove practicing spinning and crocheting and dreaming of springtime and gobs of shed hair from the Sorraias...

Finally, the air softened and the snow melted and the sun's angle warmed Manitoulin Island, and the horses began to yield up their no-longer-needed winter undercoats.  I was ready with my brushes!  Thank goodness we are friends with these "wild" horses and they enjoy being brushed and itched, because while they are "tame" they are not "trained" in the traditional sense where one puts on a halter and holds them for grooming sessions.  They come to me of their own choosing and are free to leave whenever they feel they need to.  Most times the trouble is not that they don't want to be brushed, but that too many of them want to be brushed all at the same time - your author only has so many hands!

Thanks to Carol Kroll's fantastic book, The Whole Craft of Spinning / From the Raw Material to the Finished Yarn, I had my first "official" instructions on how to set about spinning the shed winter hair of horses into yarn.  Carol validated what Deb had been thinking - that the horse hair would spin better if blended with a longer fibre, like sheep wool.

First I carded up a little bit of sheep wool from Buddy's washed fleece.  Then I placed scant palmfuls of Sorraia horse hair over one of the cards and spread them evenly.  And then I carded the fibres together.


With my first rolag ready, I began to spin my first Sorraia yarn on my homemade drop spindle.  It worked!

Carol Kroll's book also suggested adding an oil/water emulsion to facilitate a better blend and spinning experience.  I did this and it did help keep the horse hair from flying all over the place.  However, after reading in Alice Bernardo's Saber Fazer blog, I decided to "spin in the grease" like Dona Benta does.  Why wash out all that natural lanolin and then find yourself having to use an oil/water emulsion to put some cohesion back into the fibres?  So I decided to blend and spin the "dirty" fibres and then wash the finished yarn.  This worked much better!


I wanted to see if I could spin horse hair on the Portuguese spindle as well, so gave that a try next.  This was not quite as easy for me as with the drop spindle, but with perseverance, it, too, worked.  How satisfying it was to spin Iberian horse hair into yarn using an Iberian hand spindle!


I decided to crochet a sampler pillow using some of the Sorraia yarn as well as yarn that I had made from other fibres.  From the top down:
--the chestnut colour is from our domestic Thoroughbred horse, Zeus
--the black colour is from a Newfoundland dog
--the heather grey is from our medium shade grulla Sorraia horses
--the white is from a White German Shepherd

I began writing this journal entry in late spring of 2015 and am only now finishing it.  It is lengthy and likely has more photos than it really needs (like most of my journal entries!)  It is my weakness always wanting to share the beauty of life with the Sorraia horses here on Manitoulin Island.  But it is  more than this...I also wish the Journal of Ravenseyrie to be a repository of useful information, whether that be for others who might be interested in Sorraia horses, or allowing horses to live as nature intended in wilderness habitats, or even making yarn from horse hair!

Now that we are in late autumn and another winter will soon be upon us, my mind is already thinking about next spring when the Sorraias will shed their hair again and I can do a more refined job of gathering, carding and spinning this special equine fibre and crocheting lovely items from the finished yarn.  In the meantime, I had better also complete some of the projects I have started from the yarn I made from them this year!  This topic will surely be one to revisit in the future.