Catch Life as it Flows


It is very rare for me to preset my camera for optimum capturing of images...life seems too dynamic for that most times!  I am happy to rely upon the auto-focus setting.  Sometimes auto-focus presents me with marvellous images of its own choosing, like the photo above with the two ravens.  I have cropped the image, but have otherwise left it as is.  How perfectly it illustrates the line from Suzuki's book, An Introduction to Zen Buddhism!

With tourist season on Manitoulin Island in full swing, the activities at my Ravenseyrie Studio & Art Gallery in the Gore Bay Harbour Centre have left little opportunity to write engaging entries for this blog.  Taking advantage of a quiet moment this morning, I will at the very least put up photos from the past few days when I was out "catching life as it flows" with the horses.


Since the very beginning of our efforts to assist in the preservation of the Sorraia and Sorraia Mustang horses by bringing together a purebred Sorraia stallion from Europe and putting him with specially selected North American mustang mares which possess Sorraia characteristics, I have worn a shawl that for some reason they have found an irresistible plaything.  It amazes me that for all the abuse it receives, it remains basically intact and serviceable to me on those days when the air is chilly.

Now that the mares live on a separate range from Altamiro and all their sons, I have noticed my shawl serves yet another purpose...it appears to provide olfactory information from the bachelors to the ladies.  Because we play games with it that involve the horses "wearing" the shawl, it becomes infused with the tantalizing smells that are not so discernible to me, but which the horses "read" with great interest.  I am convinced that through the medium of the shawl, the boys know the girls are still a part of their world - however far removed - and vice versa.

Last Friday I was out for an evening hike and spent some time with the young stallions, who, noting that I was wearing my shawl promptly were determined to take it off me and engage in playful activities.  At these times, I will typically throw the shawl over the first colt who tugs it off my shoulders.  And then, those colts begin playing on their own with it amongst themselves.  I only intervene if they have tossed it to the ground with the intention of trampling it or if they excessively are chewing on it.

A brief article written by Hardy Oelke about these shawl games our Sorraias engage in appeared in the July issue of the German magazine Western Horse.  This article sums up what occurs as a sort of "self-sacking-out".  The horses and I know, however, that it bears little resemblance to the forced desensitization of typical "sacking out" that some trainers impose on their horses. 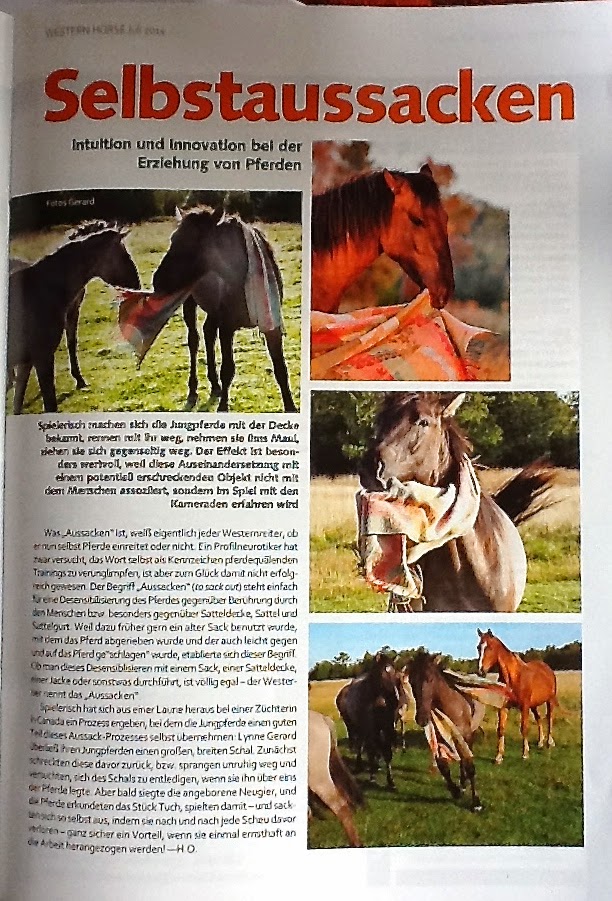 So much for the bachelors of Ravenseyrie and their interest in my old shawl.  What about the Ravenseyrie mares and fillies living on the Twinravens range in Tehkummah?

How thankful I am for my one day off during this busy tourist season!  Mare Monday yesterday was breezy and coolish, and after the ladies enjoyed the treats I brought them, the shawl games began with Altavida tugging it off my shoulders.


"After three and a half centuries spent charting and measuring material nature as though it were a pure exterior, we've at last begun to notice that the world we inhabit (from the ocean floor to the upper atmosphere) is alive.  The feelings that move us--the frights and yearnings that colour our days, the flights of fancy that sometimes seize us, the creativity that surges through us--all are born of the ongoing interchange between our life and the wider Life that surrounds us.  They are nor more ours than they are Earth's.  They blow through us, and often change us, but they are not our private possession, nor an exclusive property of our species.  With the other animals, as with the crinkled lichens and the river-carved rocks, we're all implicated within this intimate and curiously infinite world, poised between the tactile landscape underfoot and the leaden sky overhead, between the floor and the ceiling each of us crouching or tumbling or swooping within the same big interior.  Inside the world."
--David Abram (from BECOMING ANIMAL/An Earthly Cosmology)