Once upon a time, not so very long ago, on Manitoulin Island there lived a family of rustic wild horses on a landscape called Ravenseyrie, part of the East Bluff near the village of Gore Bay.

These horses were not indigenous to Manitoulin Island, but were brought to Ravenseyrie from various places in North America and Europe as part of a transcontinental conservation effort to assist in the survival of a type of ancestral equine that has retained characteristics of the extinct European Wild Horse (Equus ferus).

The European Wild Horse was historically known as the Tarpan and had distinctive traits, many of which continue to be expressed in rustic equine types like the Konik pony of Poland and the Sorraia horse of Portugal.  It is the Sorraia horse that has been the focus of conservation at Ravenseyrie.

Several types of prehistoric horses are depicted in cave paintings, some are similar in appearance to modern day Sorraia horses, others resemble the Przewalski's horse and the Exmoor pony.  Sorraia horses are conformationally longer and leaner than the more recognizable Przewalski's horse and most are mouse grey with dark masks on their faces and a convex profile, bi-coloured mane and tail, a dorsal stripe and contrasting barring on the legs and shoulders.  During the Middle Ages, these wild horse types were called "zerbros" and "encebros" by the people living in the Iberian Peninsula and while the peasants would occasionally capture and force them to be beasts of burden, they were mostly hunted as wild game for food and hides.  Over time, agricultural and urban pursuits expanded and the habitat for many indigenous wild fauna disappeared, the striped horses became distant memories.

In 1920 while on a hunting excursion in a remote, unpeopled sector of unproductive "sesmaria" land the eminent Portuguese zoologist and horse breeder, Dr. Ruy d'Andrade, happened to sight a band of striped horses living wild along the Sorraia river.  He made notations and sketches of them before leaving the region and continued to be intrigued by their existence and their possible origins.  Ten years later, Dr. d'Andrade was able to assemble a breeding herd of these primitive looking striped horses and established a wild horse preserve at Herdade da Agolada in Coruche.  d'Andrade called these horses, Sorraias, after the location of where he first discovered them.

Dr. d'Andrade's efforts and those of his children and grandchildren effectively saved these ancestral horses from annihilation yet they remain an enigmatic, controversial endangered sub-species even today.  There are less than 300 Sorraias in existence (mostly in Portugal and Germany) and they have undergone a genetic bottleneck due to high concentrations of inbreeding.


Lead by the efforts of German researcher and renowned horse breeder, Hardy Oelke, a remarkable discovery was made when mtDNA studies revealed that in addition to certain strains of North American Mustang horses being similar to the Sorraia in their phenotype, they also show a link via their genotype.  There are even fewer mustangs of Sorraia type still in existence in North America than there are Sorraia horses in Europe - however, of those that have can be found here there is far less incidence of heavy inbreeding.  An outcross of the Sorraias in Europe with the North American Sorraia Mustang would appear to be of great advantage to the overall population!  Soooooo... 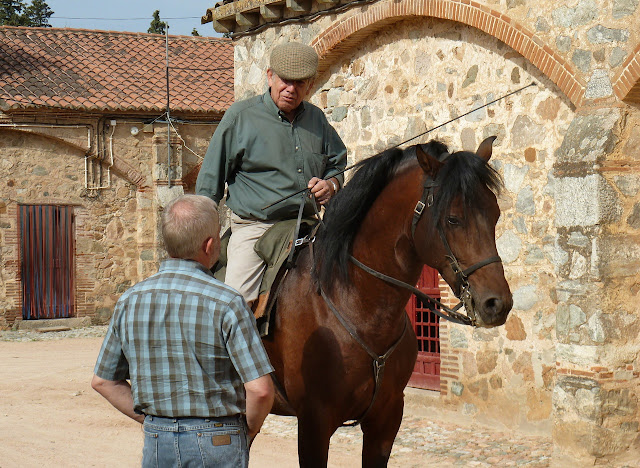 
...the Ravenseyrie Sorraia Mustang Preserve was established in 2006 with a mandate for conserving Iberian Tarpan type horses by crossing a purebred Sorraia with select North American Mustangs of Sorraia type, creating a hybrid vigor that provided their rustic genetics opportunity to reconstitute essential variablity, lest inbreeding eventually finish the extinction that has continually threatened these horses in modern times.

The magic began in 2005, when two Sorraia Mustang yearling fillies (Bella and Belina) were imported to Manitoulin Island from Caballos de Destino in South Dakota.

In 2006 Ravenseyrie was able to acquire the yearling Sorraia stud colt, Altamiro (Ultrajado x Pompeia) of Portuguese lineage, born at a zoological park in Springe, Germany.

In 2007, Ciente, a two year old Kiger Mustang filly of Sorraia type born on a First Nations reserve in southern Ontario was brought up to Manitoulin Island and the following year Sovina's Zorita, (half Portuguese Sorraia, half Sulphur Mustang) was imported from Oregon, USA to join and complete the breeding herd for Ravenseyrie.

These Sorraias were given free range of a 360 acres of wilderness and allowed to live in complete autonomy according to their instinctive urges in rhythm with the Manitoulin Island biosphere.  It was an amazing time!

Between the years of 2008 and 2013 twenty foals would be born making Ravenseyrie an important contributor to the overall genetic resource for Iberian Tarpan type horses.  In 2011 three of the Ravenseyrie offspring were exported to Wyoming, USA, but have not as yet been used for breeding purposes.  In 2012 two fillies from Ravenseyrie were exported to Austria, where they since have been living with a Portuguese Sorraia stallion and having foals of their own.


As successful as it was shown to be to cross the European Sorraia with North American Sorraia Mustangs, the majority of people interested in the Ravenseyrie offspring prefer to take them from the wild and train them to be riding or carriage horses, which is not compatible with the vision we hold for them.  With lack of serious intentions from conservationists devoted to free range wild horses of Iberian Tarpan type here in North America as well as over in Europe, the difficult decision to separate males and females and cease breeding was made in 2013.  All the males continue to live on the Ravenseyrie preserve and all the females have been relocated to a preserve called Twinravens in the south-central part of Manitoulin.


At the present time we are no longer offering our offspring for sale, but may reconsider if the right type of conservation or "rewilding" opportunity arises.  The "bachelor band" at Ravenseyrie and the "ladies group" at Twinravens continue to live free range in a marvellously beautiful symbiotic relationship with the wilderness landscape.


UPDATE 02Feb18
In 2017, Tocara and Levada (two of the mares that were born on the Ravenseyrie Sorraia Mustang Preserve who had been living in Austria) were transferred to a rewilding preservation effort in Northeastern Portugal, joining other full and partbred Sorraia horses.  You can read about this historical event here, Genetic Migration of Sorraia and Sorraia Mustang Horses and here, Sorraias at Quinta do Sol
After spending the 2017 breeding season with the Sorraia stallion, Bimbo the  mares are now running with the striped Lusitano stallion, Larapío.

Since 2008, The Journal of Ravenseyrie has chronicled the amazing experiences of these horses through words and images and will continue to do so, along with other topics related to and inspired by them.  Please visit the archives to find in depth stories and informative articles.


Ravenseyrie Sorraia Mustang Preserve is located on Gore Bay's famous East Bluff.
Ravenseyrie  is a private preserve and is not open to the public.

"The unique thing about the Sorraia horse is that it is not a breed, but a relic; a horse which largely embodies the indigenous South Iberian wild horse, and the prehistoric form-III horse."


"The fact is, that we can find individuals among today's mustangs which resemble the Sorraia to such a degree that one cannot tell them apart."


"If horses mate who all carry many of the genes of a certain form, and live in an environment ideal to the needs of this form, it is only a matter of time until individuals result which represent that form completely."

--Hardy Oelke
(Excerpts from BORN SURVIVORS ON THE EVE OF EXTINCTION)


Other articles of interest can be found at Hardy Oelke's websites or you may enjoy reading these entries from the Journal of Ravenseyrie:

--Pleistocene Horses, The Zebro, The Tarpan and The Sorraia/A Shared History?