"This is misery," I thought to myself, "I cannot keep this up!."
Trembling muscles, twanging ligaments, faltering mind and still I fill my shovel with snow while the winds howl whitely around me.  Taking breaks and coming at it again, eventually, the dense drifts were removed and the gate swung freely.  How many times did this scene play out this winter?  I have lost count!  Perhaps Monday's effort to free the gate is the last for the season and we surely are turning toward a significant melt?

I cannot blame Winter, my love for it remains.  What, then, accounts for the often wretched misery in my mind?
Bare-boned fatigue and nothing more.

Rest and recovery will have me feeling peppy again, and healthier and stronger for the effort, I do believe.

It has been an inexpressibly challenging winter for everyone on Manitoulin Island, but especially so for all the wilderness creatures and those providing for livestock.  As noted last month in The Manitoulin Expositor:

Ian Anderson, a former Conservation Officer (CO) with the Ministry of Natural Resources (MNRF), trapper and long time resident of Manitoulin Island says the current weather conditions for deer on Manitoulin Island are the worst he has ever seen. “It’s official—these are the worst conditions I’ve seen for deer in my 46 years living on Manitoulin Island,”[...]“The conditions are really serious in some places with over 40 inches of snow on the ground,” said Mr. Anderson. He said there is no area on Manitoulin or the North Shore where there is less than 30 inches of snow on the ground (in places where deer would normally feed). “And this is really compounded by the freezing rain, and deer can’t travel on top of the icy crust and snow.”

For the equines of the Ravenseyrie Sorraia Mustang Preserve, conditions on the range have been like none we have ever experienced before.  Typically, even when snow levels are quite deep, while the horses do not venture down the bluff to the lake shore in wintertime, they do roam into all the various sectors up on the tableland.  Not only are these wild-living Sorraia horses accustomed to navigating deep snow for daily tours over the expansive landscape, but they also dig (excavate!) through the snowpack to dine upon the winter-pressed edibles below.  These horses also browse on bushes, shrubs and tree bark, gathering nutrition in fascinating ways.

But this winter, the varied and numerous storms frequenting the island have created a situation where deep snow has been saturated by freezing rain, forming a crust often better than two inches thick, followed by more layers of deep snow.

For the horses, the sensation of penetrating the first layer of deep snow, then meeting with and breaking through the sharp ice crust and sinking belly-deep further into the snow underneath the ice crust is, not unsurprisingly, painful and emphatically off-putting.  They therefore have curtailed their usual sector to sector roaming of the tableland and instead keep themselves to just a scant handful of single-file, narrow packed trails that lead to sheltered spots and and feeding areas.

There are no easy turns on one narrow path, especially when the stallions are head to tail and the one in front decides to stop.  It is a peculiar thing to see 6-9 horses lined up on a trail like a stalled train.  Eventually the leader is pressured to continue forward or the group turns and goes back from where they had come.  Extreme lumbar engagement and deep flexing of hindquarters allows the horses exquisite poise, permitting them to artfully pirouette for changes of direction without chancing falling off the firm traction of the trail and becoming engulfed in deep snow.  These Sorraia horses are masters of collection!  Nature is the best dressage teacher.  An entire book could be written on this alone!  Even so, in these restricted conditions a bachelor band comprised of seven stallions and two geldings (who have been claimed by one of the stallions as if they are mares), petty arguments and the habitual aggression among them has in some ways become more pronounced and in other ways subtly restrained.  When I am able to set aside my anxiety over the situation, it is fascinating to see how they adapt to whatever new challenge the day presents in their wilderness preserve.

For two equines, (who due to particular circumstances we have had to keep separated from the rest of the stallions) the navigability of their spaces is even more restricted. Massive drifting has overtaken both the holding pasture and sorting corrals.  The old draft mule, Jerry, and the small, one-eyed stallion, Destemido* unfortunately cannot, as we had hoped, share the conjoined spaces of the holding pasture and corrals together, though we have tried numerous times.  Destemido's wanton aggression toward Jerry is more than what a 30 something gelded mule can tolerate.
*Destemido presently cannot be turned out on the range for reasons which are too involved to discuss in this particular blog entry

This means for the first time we have had to close the gate between the holding pasture and sorting corrals during wintertime.  For the duration of winter, week by week we are switching these sequestered boys so that neither of them has to be in the smaller space of the corrals for longer periods.

It is vital to be able to use the gate between the two sectors which has been a real problem due to the significant snowfall and the way the gale winds have repeatedly buried that gate in a dense, massive drift.  With the landscape so staggeringly snowbound, there is no getting the tractor in to scoop away the immense drift.  It falls to your author and her shovel and her determination.

As noted in the opening of this blog entry, keeping the gate serviceable has turned out to be a repeated test of my endurance.  Wave after wave of snow and wind storms vexatiously undo all the work I  repeatedly do to keep it free to swing open.

Added to this is the stress and anxiety of seeing how difficult these conditions are for the horses, especially for Jerry and Destemido.  Their narrow trails are so precarious and so near the tops of the fences and gates in spots!  When Jerry is in the holding pasture, there is not mischief over the gate that faces the open range.  But when Destemido is in the holding pasture and the other stallions come up to the gate from the range side, they each stand on three feet of packed drifts and attempt to do battle over the gate.  One misstep on the compacted, firm spot and either stallion risks tumbling into the gate or off into the four foot drifts.

Since that photo was taken, the "platform" Destemido is standing on has grown even higher, so Kevin has strung a line from the upright posts to hopefully deter these types of nail-biting encounters.

Then there is the task (which falls to Kevin and his magnificent Kubota) to keep our driveway and shed areas free of snow.  Never in our fourteen years living here on the East Bluff has Kevin had to do so much relocating of snow to make it possible for us to get out and about.  He has made snow mountains all around the place.  This is in addition to the countless times throughout the winter he is packing toboggans full of hay and going to the forest to fell dead timbers for our firewood.  There is a Zen saying:

For Kevin, it is chop wood and pack hay.  Adding to that this year is "remove snow" and "drive every few days to Tehkummah to bring hay to the mares" - the later which is yet another stressful drama that winter has presented for us and the horses and too involved to elaborate upon in this today's blog entry.

Most days, Kevin maintains his Zen mindset while facing all these labours and he surely stands as a positive role model for me when my extreme fatigue gets the better of me.  In fact, I would be undone if not for Kevin's amazing strength and equipoise. 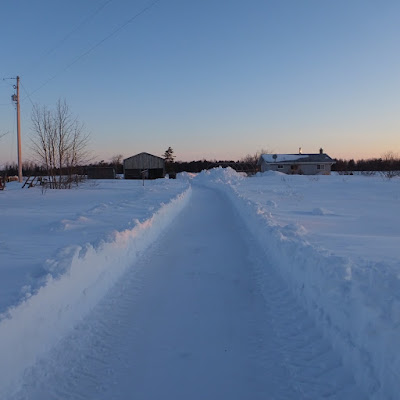 ___
Edit on 16Mar19
A couple of my friends have noted that I forgot to mention that in addition to the brutal winds and copious amounts of snow, we had more than our usual share of monstrously bitter cold air temperatures due to the "polar vortex" that effected so many regions of North America this winter.  So I am adding a couple photos documenting a particularly "chilly" morning at Ravenseyrie when our thermometer dipped to -35ºF/-37ºC and only "warmed up" to -28ºF by midday.   Week after week we were showing temps that were in the minus twenties farenheit for daily "highs".  Very bitter, and dangerous with the wind chills that gales enjoyed creating.  Heating with wood during the deep freeze and high winds often makes it difficult to keep warm in the house unless one is near the trusty Jøtul wood stove.  At the kitchen table where I have my breakfast the temperature one morning was +45ºF and thick frost on the inside of the window.  We get by with extra sweaters and wool hats (and a dram of AlpenBitters #7 in the evening for sure!) and knowing that the deep freeze does not last forever.


With all the other shovelling at home and at work and the stints on snowshoes to help Kevin get hay out to the other horses, and useless anxiety over so many things I cannot control, somedays I am nearly done in both physically and mentally.  But I am buoyed by the stoic adaptations of the horses and bolstered by the ever-present support of a capable, congenial husband and with a little rest, I recover.

Once rested, I can look upon the character of this year's winter as if it is a supportive entity, like a shaman or a guru.  Through this philosophical lens, I am less inclined to look upon the character of this winter as a malevolent force, instead I perceive it as an essential facilitator of personal growth, designed to benefit the greater whole.

Inner reflections such as these are a luxury one rarely can indulge in when straining with chest pounding and steps faltering in the middle of a snowshoe trek to the forest with hay, often in the midst of tormenting winter storms...but even within those ordeals, the rarified beauty of the elements of the day do not go unnoticed.


With the very real possibility that winters this severe will become the norm and not the exception, Kevin and I will develop new ways of maintaining the preserve and incorporate more effective measures of preparing for extreme weather.


This way of life is ours by choice, even as it often makes for austere and back-breaking conditions.  The rewards of stunning atmospherics, hungry horses feeding upon dried summer and knowing a warm house and an appealing meal with my beloved  await me at the end of day remind me that I am right where I want to be doing things that hold great meaning for me.  Let's see what the next day brings and carry on in a beautiful way!

______
I would like to extend immense gratitude to our municipal road crews who tirelessly work to keep our roads accessible, not an easy task on Manitoulin Island, especially on our East Bluff access.  Scotland Road has got to be the most challenging stretch for them, but somehow, they make it navigable and we few who live up here, sure are thankful for the great effort!