Paleolithic art is a silent touch from distant ancestors, their marks a reminder of our own vitality and mortality, a prompter to savour our present in this ancient arena of life...A seer throws the old ivory carvings, kneels, and reads them thoughtfully: "They say, 'Wake up, you are on; we have had our time and this is yours.'"  She smiles and -- I thought she was mocking, but perhaps not -- goes on to say that the truly good message from Paleolithic art is "that one would be wise to play: play physically, play mentally, and, above all, play artfully."  (from THE NATURE OF PALAEOLITHIC ART by R. Dale Guthrie)

This is a special time!  Summer wanes and autumn begins to assert itself with all the marvellous variety of fragrances and colours that one season yielding to another generates.  Foot traffic in the gallery is reduced and the constant necessity of printing and assembling my handmade greeting cards is not so intense.  This in-between seasonal magic provides me the opportunity to rekindle my love of painting on the amazing rock "canvases" that I collect from the Ravenseyrie beach along Lake Huron's North Channel.   I have written just a little about my exploration in rock paintings in these blog entries:  Rocks That Speak,  Signature, Seal, Chop and Influenced by Love and Familiar Forms.  In today's journal entry, I thought I would share some recent rock paintings I've completed and put in the gallery.

First I will share the information card that accompanies every rock painting I sell and tells a bit about how I go about making these paintings: 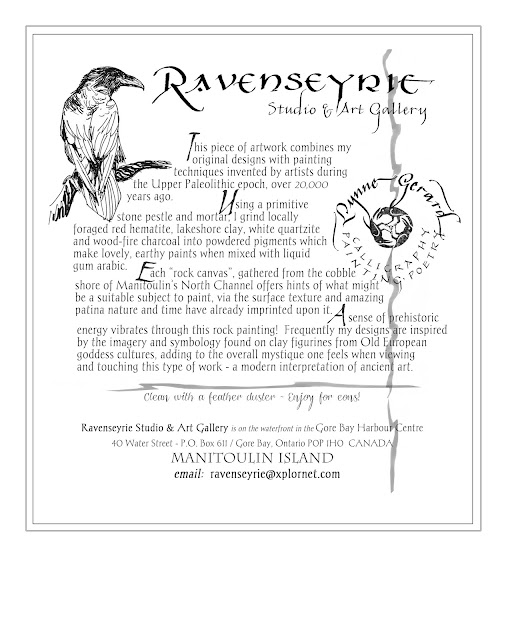 Here is a snapshot of what my little rock painting station looks like: 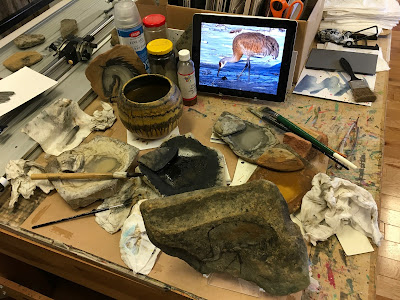 "It is very possible that the paintings would have become mediators between an art reflecting the visible world and another world, which, though supernatural, was nevertheless present in people's daily lives."  (from The Cave of Altamira by Pedro A. Saura Ramos, excerpt from the essay by Antonio Beltrán)

And now some images of the recent works:


"The cave painters may or may not have had the idea of art as we understand it, but when they chose to draw an appealing line instead of an awkward one, they were thinking and acting like artists trying to create art in our sense of the word.  That's why it's valid for us to respond to the cave paintings as art and not merely as archaeological evidence, although they are certainly that as well."  (from THE CAVE PAINTERS / Probing the Mysteries of the World's First Artists by Gregory Curtis)

"In Paleolithic art, horses dominate.  In some spots, they can be outnumbered by bison, deer, or even rhinoceroses - or felines at the very beginning, in the Chauvet Cave - or much later, the mammoths at Rouffignac.  Nonetheless, horses are numerous, no matter the styles, techniques used, period, and region.  The subject of the horse to some extent forms the basis of parietal art."  (from THE SHAMANS OF PREHISTORY / Trance and Magic in the Painted Caves by Jean Clottes and David Lewis-Williams

I will leave you with a 16 second video clip giving a better view of "Ancient Influences", which is painted on a most intriguing stone.  (patience, please...it may take a little time to ready itself for playback.)