A Continuing Legacy at Ravenseyrie 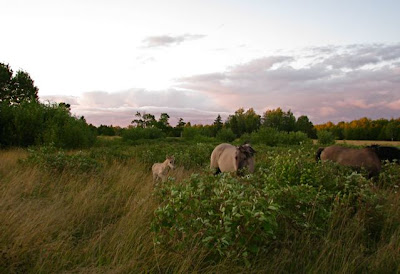 The Elementals create a magical scene in greens and lilacs at the Ravenseyrie Sorraia Mustang Preserve on a summer evening.

On my 2010 calendar I have it documented that after Zorita gave birth to Levada, she was settled by Altamiro on her foal heat less than a week later. This would have put Zorita's 2011 foal due in late June to early July and she certainly looked the part in these photos taken on July 4: 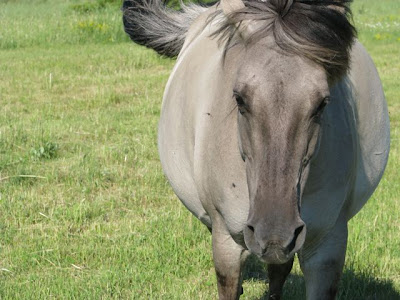 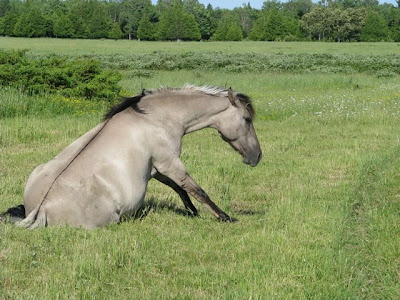 Zorita likes to sit like a dog and rub her bum on the short grasses. 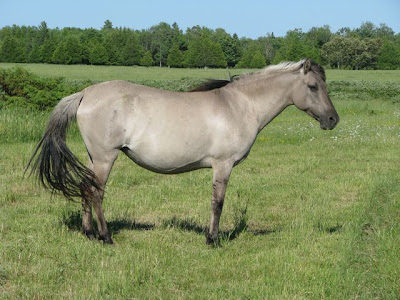 Zorita
by the Sorraia stallion, Sovina and out of the Sulphur Mustang mare, Tia

During this time her udder looked plump, but never taut, or waxy or dripping, and some mornings it didn't look like there was milk in it at all. When these uncommitted indicators continued, I knew for sure that a two day heat observed in Zorita in September of 2011 was not a fluke thing, but that somewhere between June and September she had aborted her fetus from the foal heat breeding and was resettled by Altamiro in mid-September. 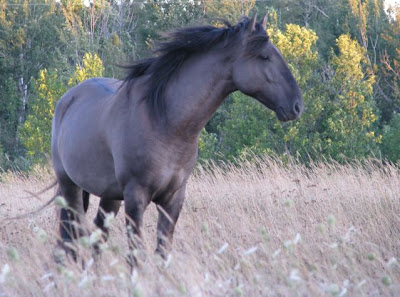 Even on the evening of the 6th of this month, there was no significant change in the way the foal was being carried, nor in Zorita's udder. But come dawn on Sunday morning the 7th, there was a delightful light form standing with Zorita apart from the rest of the family band who had come up for their breakfast oats. I didn't have my camera on me at the time, but I brought a pan of oats out to where Zorita was waiting and was able to get a closer look at her new foal. I was delighted to see that this time she had delivered a colt!

Later in the morning I went back out to where the family band was grazing and took some photos: 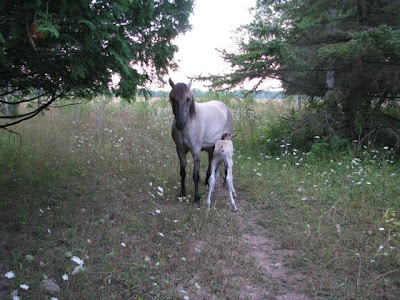 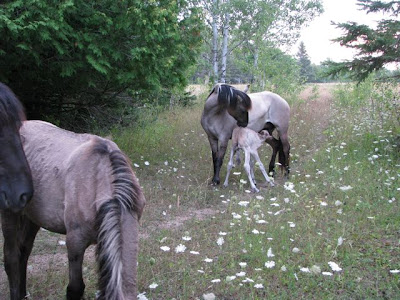 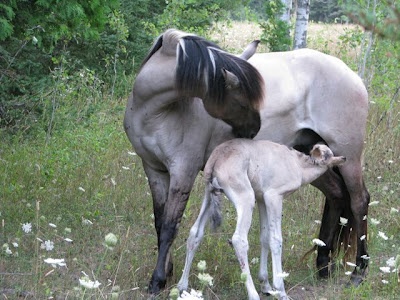 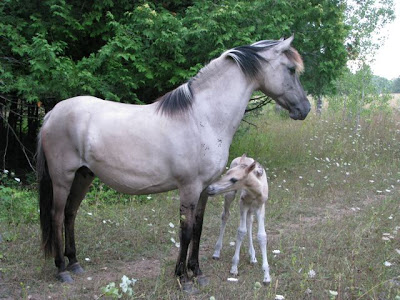 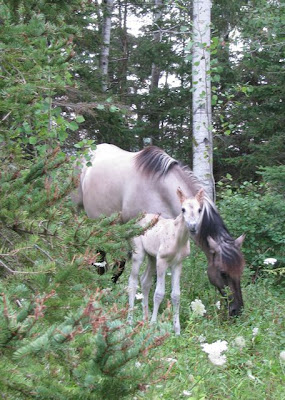 And then in the evening of the same day, I went back out and took more photos, of course! 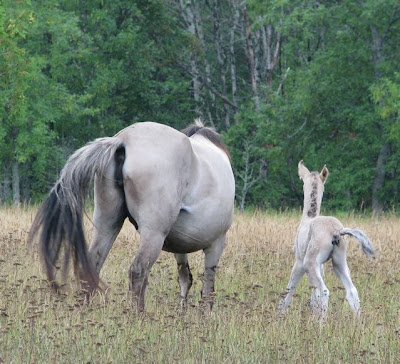 It is always a delight to see newborns get the feeling of what it is like to be a seemingly lighter-than-air quadruped, after being nearly a year suspended in fluid inside a beautiful mare. Zorita's colt enjoyed engaging in short sprints around his mother: 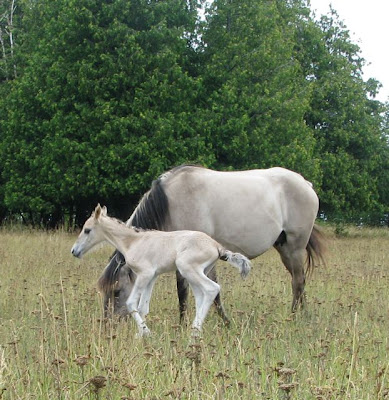 Then this stunning colt paused and gave me a very nice pose which showed off his leg stripes on both front and hind limbs: 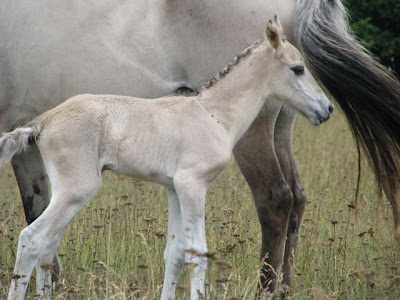 Of course after exercise and posing for the camera, one must take a blissful nap: 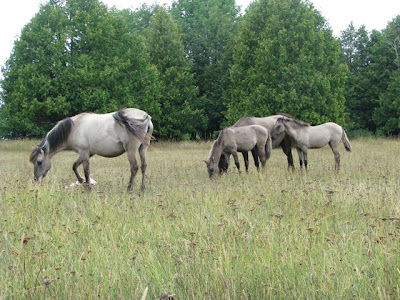 In the following days, I went out frequently to get to know the new colt and get a sense of what name he might like to be presented with. Always he would look directly at me, with a lovely pose and a friendly, yet serious expression before tentatively coming close enough to reach his muzzle out to touch me. I felt as if he was trying to tell me something but hadn't yet found a way to share, other than to demonstrate a sort of calm assuredness beyond what one would normally expect from a days old foal. 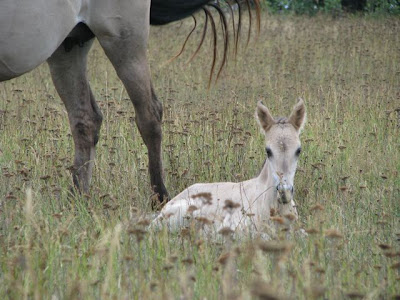 I began to get the sensation that here in this perfect colt resides an amazing legacy which will be continued into future generations once he matures and sires his own offspring. Zorita's colt is endowed with a double dose of purebred Sorraia genes --not only has his sire, Altamiro, passed his amazing reliable DNA along, but through Zorita, the genetics of the purebred Sorraia, Sovina (living in the U.S.) are also part of this new Sorraia Mustang's heritage. Having been gelded a year or so ago without having left any male offspring who haven't already been gelded, Sovina's lineage can only continue to contribute through the few females he has sired, of which only Zorita possesses the Sorraia phenotype. 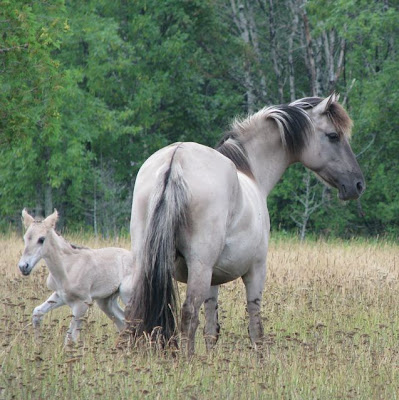 The genetic (and phenotypic) inheritance that has been bestowed upon the Ravenseyrie foals serves not only as a safeguard for the nearly extinct Sorraia and Sorraia mustang horses, but also demonstrates the persistence and durability these ancestors of the Zebro/Iberian Tarpan possess. These primitive horses have an important legacy to continue. 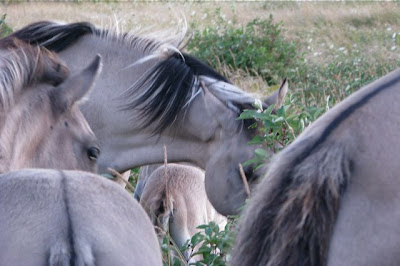 Their story--first observed emerging from Paleolithic rock art, later woven through medieval literature and in the modern era has been rescued from complete obliteration by a few devoted conservationists and private breeders--has more chapters to be added. Each of Altamiro's "kids" are contributing tremendously to this ongoing true, historic and iconic legend. 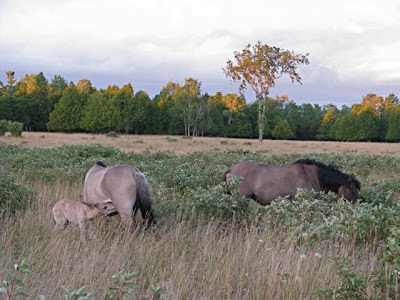 Whether or not they all contribute to carrying forward their genetics by being part of other Sorraia and Sorraia Mustang breeding programs, each of them--Animado, Fada, Interessado, Encantara, Silvestre, Segura, Pinoteia, Tocara, Levada, Esperanda, Altavida, Destimedo and also now Zorita's colt--add romance and beauty to this ongoing saga of the Form III ancestral equine by their reliably consistent forms and amazing individual personalities. 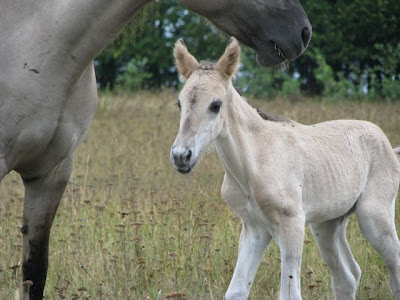 Because it has been Zorita's newborn colt that prompted me to more fully appreciate what a legacy he and his siblings represent, it was only fitting to offer up to him the name, Legado, which I am sure astute readers already have figured out is the Portuguese word for "legacy".

When I first spoke it to him last night, he and the rest of the family band were trotting up to come to the area where I had been spreading out "treats" for them. When I saw Zorita coming from behind the others, my eyes and the colt's eyes locked into each other and I tentatively called out, "Legado?". Even as the word was leaving my lips, this mythic colt angled himself directly to me, with Zorita following his trajectory, then both stopped right in front of me. "Legado!", I announced jubilantly to all that surrounded us. There was no point in asking for his approval, he seemed already to have laid claim to this name.

I know there are among the readers of the Journal of Ravenseyrie (from all across the globe!) many who will feel the call to help continue the legacy of these wild Iberian horses. We humans are part of this ongoing story, too...though the chapters we appear in haven't all been for the preservation of these types of horses. We humans can put our past misdeeds behind us and take positive action now so that the history we create today shows we support initiatives that aim to safeguard and strengthen the primitive Iberian Tarpan genetics still present in the Sorraia and Sorraia Mustang. 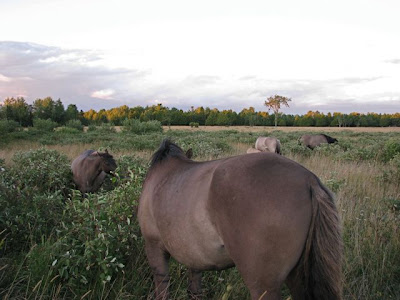 Whether you have land upon which you can begin your own preserve, or perhaps want to befriend a gelding or mare with no interest in breeding (or keep a bachelor group of stallions)--or even if you have no room for a horse in your life right now at all, you can still spread the word about the important roles the Sorraia and Sorraia Mustangs are playing in keeping a link to the ancient past alive into the future. All these things help Legado and his siblings (and all the other equines who possess these prehistoric genetics) continue their important legacies.