With no television here at Ravenseyrie, it is through bending my ear to CBC Radio or exchanging pleasantries with the locals that I gain a sense of how winter is perceived by a great number of people.  Around Christmastime winter weather is sentimentally embraced - the rest of the season it is considered a malicious impediment to the normal rush of human routines.  Indeed, winter weather presents us all with certain challenges and hardships whether you dwell in a well appointed city or in the tangled wilderness.  As usual, perception is often the determining factor in how smoothly one is able to cope with occurrences that fall outside of the narrow comfort-zone of what we have learned to call "normal". 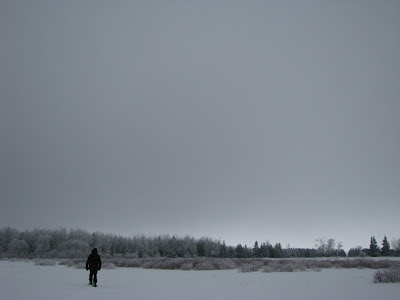 Many times throughout the archives of this journal, I have written about the tempering Kevin and I endure as "Eastbluffers".  We did not know this when we purchased the property up on Gore Bay's East Bluff overlooking the North Channel of Lake Huron, but the local folks consider the easterly bend of Scotland Road a somewhat exotic high-hinterlands - an intriguing place to venture to when out and about on a leisurely drive, but not necessarily a place to live year 'round.  When we first moved in, I remember one genteel lady commenting that surely we did not intend to live up here in the winter, did we?  Another woman, who years ago spent some time up on our very property, exclaimed that she could never live here because she couldn't abide the nearly ever-present wind.

These reservations surprised us as we knew in bygone days there was quite a thriving little community of hardworking family farmers who lived up on the East Bluff.  They were Scottish immigrants so this part of the bluff was called "Scotland".  There had been a small school house in the field across the street from our house and I was told some mighty fine barn dances were had among the various farms in "Scotland".  Must have been quite exciting times, then!  Now, most of the farms have been sold to off-island folks who use them as "hunt camps".  There is one intrepid fellow who lives up here year 'round, two lots to the east of us, who though a relative newcomer to the island seems to be made of the same sturdy stock as those Scottish immigrants.  I guess Kevin and I are stout enough, too, as we take it all in stride and enjoy the feeling of aliveness living here provides.

Despite its obvious hardships, Kevin and I truly enjoy winter, being outdoors, physical labour, and living in an environment that knows no taming.  Our love of this way of life means we move with the moods of winter and do not attempt to oppose it - there is no perception of "Man against Nature" here.  We are not at war with the drifting snow, the bitter winds, or the deep, penetration of sub-zero temperatures any more than we feel antagonistic toward the black flies, mosquitoes or excessive dry conditions that are present during different seasons up on the bluff.  We follow the lead of the horses and the other animals and plants that have adapted to the extremes of a landscape such as this - we take each day as it comes, finding something meaningful and worthwhile in every nuance.

I think the reason we appreciate this way of life is because we are "in love" with the creative urges of the universe and how they are manifested so energetically in wild places like Ravenseyrie.  When you are in love, everything is beautiful and fascinating and feels like an extension of yourself!

"Spontaneity became a way of life, the real became natural and the natural became real.  And above all infinite affection, love, dark and quiet, radiating in all directions, embracing all, making all interesting and beautiful, significant and auspicious."  -Sri Nisargadatta Maharaj from the book, I AM THAT


This is the second winter that I have had a disruption to what used to be the routine of running my Ravenseyrie Studio and Art Gallery down on the Gore Bay waterfront.  After six years of year 'round business, in November of 2011, I put everything in storage while the building I lease space in underwent major renovations.  It had been expected that I would be able to move back in and reopen to the public in the spring of 2012, so it seemed a five month sabbatical was in order.  Little did I know that construction on the Wharf building was going to last well over a year!

It was not what I expected, but it has worked out well, providing me with a lot more time to spend with the horses and researching all things related to Sorraias even deeper.  The extra free time also prompted me to pick up again the pleasure of playing my old wooden recorder.  Time away from the public also allowed me to more easily cope with some of the physical aches and fatigue associated with my progression through "the menopause".   As it turns out, I was glad to have the reprieve from all the responsibilities and obligations with a public business.

But, a year without an income and art has surely had me feeling very "itchy" to pick up where I left off!  Thanks to some dear friends, I have been fortunate to arrange a situation where I am now squirreled-up in an upper room of a vacant house where I have set up just my easel and paints.

In this room I am spending roughly four hours each week day working on creating new images for the gallery when I am allowed to move back into my new improved space on the waterfront.  I've had a desire to work with some portraiture, combining nature and the human element within a blending of abstraction and realism.  As many have heard me say time and again...I am a writer first and an artist second - and no where does it show more than when I begin to attempt to draw or paint humans!  I will spare you close ups of my gross failures...instead I will share with you a few sketches that I worked up after my friend, Hardy Oelke (who is not only an author and a co-preservationist of the Sorraia type horses, but is also a highly accomplished artist) gave me some great guidance on how to make my portraits more structurally correct before I get to floating lively watercolour pigment on paper.  Thus far I have been working mainly from photos of my own, dear Kevin - who is soooo wonderfully interesting as a subject (and delightfully accommodating to his wife's habit of snapping photos of him during all times of the day!)

A man like Kevin Droski dwelling in a rugged wilderness environment presents plenty of fodder for potential artistic compositions!  Here is one example of the many great "looks" Kevin naturally has that inspire me to want to try to work into a painting:


After much failure, turning to a fresh page in my sketch book and starting all over, here is a drawing that only has a handful of things that ought to be corrected: 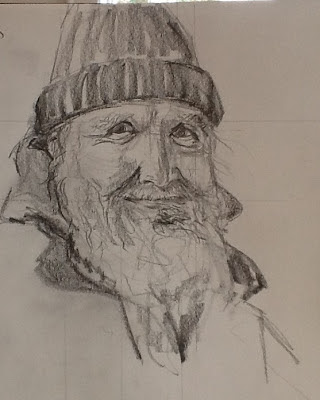 (Update 01Mar13)Here is a follow-up effort of the same pose, showing a little more improvement, but still a ways to go for a true likeness of Kev: 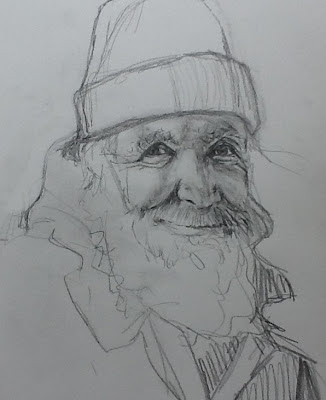 Perhaps tomorrow, I will try another drawing of this same pose or maybe feel brave enough to move into attempting to paint this particular pose within a context of abstract and realism.  Or maybe I will begin a painting instead working with this other sketch (once I get things more "structurally correct"): 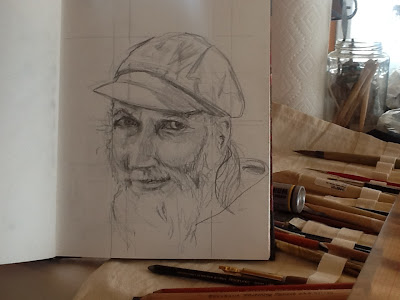 When I come home from my little creative endeavors at the temporary studio, nothing chases away the glum feeling of artistic inadequacy better than being with the horses!  It doesn't matter if the wind is up and I must pull my toboggan-load of hay to the shelter of the forest, or if that enchanted late-day sun has me following light and shadow with frozen fingers holding the camera --being outside with these fabulous friends makes me feel once again that anything is possible with enough earnest devotion. 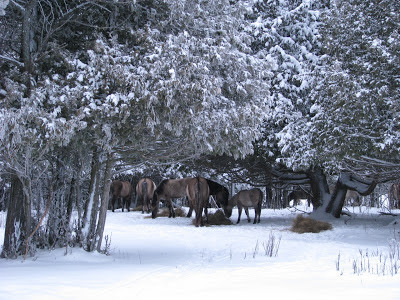 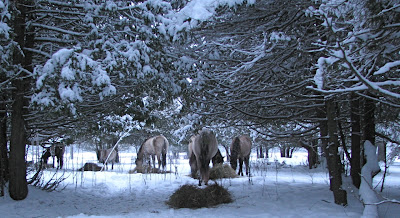 Often, if there is enough light left to the day, I will fetch some branches to bring to Destemido and Legado who are patiently waiting in our "holding pasture" to be moved to their new life away from Ravenseyrie.   These two colts are destined to "seed" the sub-preserve on the property of Mark Seabrook and Michelle Hrynyk here on Manitoulin Island.  We had anticipated moving these fine colts in late autumn, but (just as with the Wharf Building) certain unexpected occurrences set things back a bit.  We now await acquisition of our own stock trailer which is projected to be ready for us in mid February.  And when last year's male foals are pushed out of the family band they, too, will travel to Tehkummah in the south central region of the island to join Destemido and Legado in their bachelor herd. 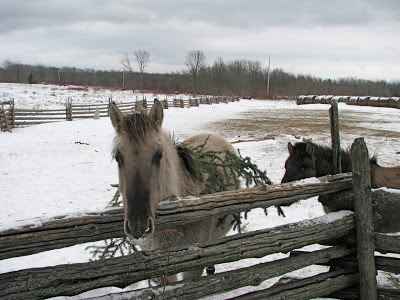 One day Legado was so eager to seek out the boughs I was bringing that he slipped his head into one as I was putting it over the fence and wound up wearing it!  It didn't upset him one bit!  Perhaps it reminded him of the many wanderings through the forest he had done when living in the big wide open of Ravenseyrie.  When released at Mark and Michelle's place, he and Destemido will once again have access to ample pasture and the shelter of a forest.  I'm excited for them! 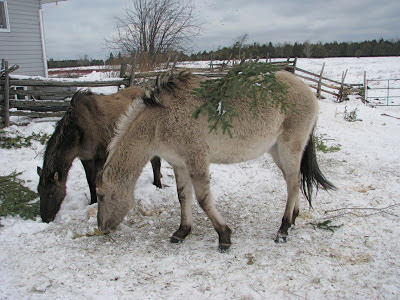 There have been a few European Starlings which have decided (like our annual flock of Snow Buntings) to hang around the horses and glean for bits of grain and grass seeds that are missed by dexterous equine muzzles.  On an especially cold day, one smart thinking Starling decided to snug into the ample winter coat on the rump of Destemido.  While I have seen birds perched on horses in other regions of the world, this is the first time I have witnessed this phenomenon at Ravenseyrie.  It is something I hope becomes more frequent, especially during the times of year when the biting insects are especially bothersome to the horses.  What a mutually beneficial relationship that would be - easy food for the birds and welcomed relief for the horses! 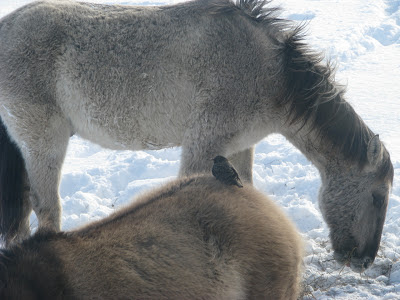 There is plenty about wintertime (and all the seasons) that Kevin and I feel a great fondness for.  Living up on the East Bluff in the historic region of "Scotland" is all the richer for its particular hardships that people living in more "civilized" settings are not exposed to.  I consider myself Winter's lover - and due to that, even the very difficult times inspire me to see it all as a beautiful unfolding of our unified relationship.  And because you have read these words and viewed these photos...you perhaps are touched by this "infinite affection" and maybe cannot help but fall in love with winter, too! 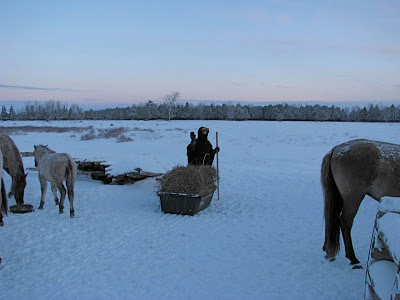