"Somehow the grace, the bloom of things has flown...
...but we have left those gentle haunts to pass..."
~Oscar Wilde (from the poem, Humanitad)

She comes to mind much more frequently than I would have imagined...most dramatically when I am moving through the northwest sector of the preserve, where she and the rest of the family band of "Iberian Tarpans" preferred to graze.

Ciente...oh how I continue to feel her loss!


And now, now that all the mares and fillies of Ravenseyrie no longer capture the sunlight amidst the East Bluff grasses I dance through everyday, I seem to miss her all the more!  How can such a throbbing pain bring both tears and a well-spring of thankfulness?  I think it is because it was so very, very good to have had a friend like Ciente and to reliably feel her singular sweet essence when she was alive and to continue to feel it still, even though she is two year's dead.


How fortunate I am that Bella & her daughters Pinoteia and Altavida, Belina & her daughter Fada, Zorita and Ciente's orphaned filly Esperanda have not gone out of my life for good, but are a pleasant hour's drive away living on the secondary preserve overseen by Michelle Hrynyk and her husband Mark Seabrook.

I will be visiting Twinravens tomorrow to spend time with "the ladies" (as Michelle calls them), but since I have a little time today, I wanted to share some photos of a couple other visits as well as include some images of what the bachelors of Ravenseyrie are up to.

It was June 4th when Belina and Fada were ready to self-load into the trailer and make their journey to Twinravens.  They were so happy to see their former herd mates and to be released into such a splendid new wide-open space:

Bella led the all girl herd (and the 4 month old colt Ousado) across the water to come greet the "newcomers".  While her greeting with Belina was brief and completely accepting, Bella determined that Fada must first be hazed and not allowed to directly join this group of "ladies": 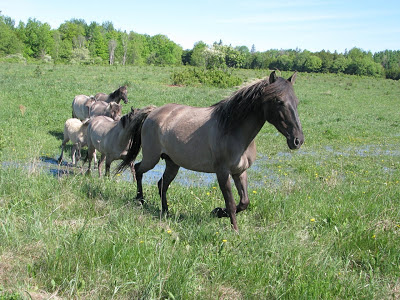 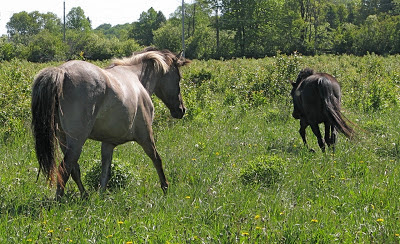 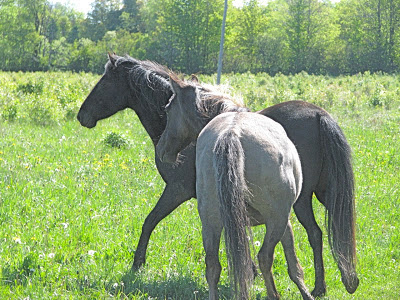 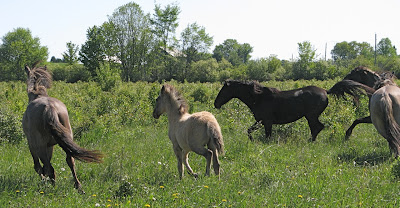 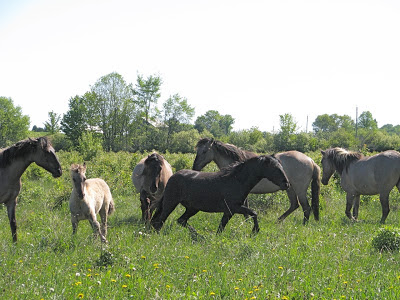 Eventually things settled down a little bit and Zorita decided it was a good opportunity leave the group to wander over to receive some enjoyable itches from Michelle and Kevin. 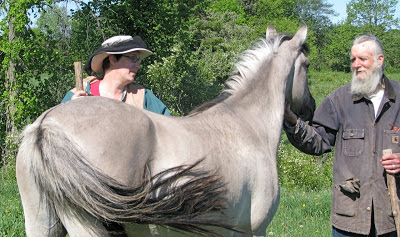 Since living in an all girl group at Twinravens, Zorita has become markedly different in her personality...softer, more engaged, less wary.  I underestimated just how strong an influence an aggressive stallion like Altamiro had on the mares.  They all, now, are much more expressive with us and among themselves it seems.  It must feel good to them to not be chased and bitten and dictated to day in and day out.

Some scenes now from a visit I had with "the ladies" about ten days later: 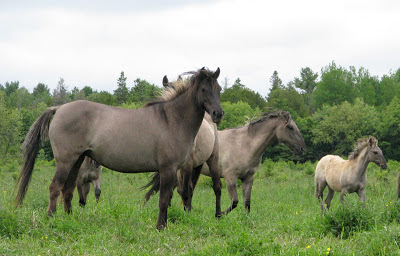 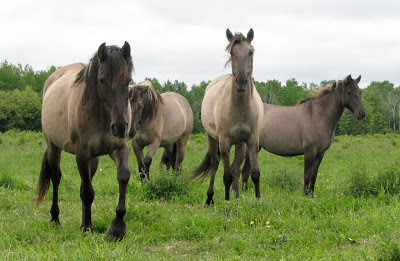 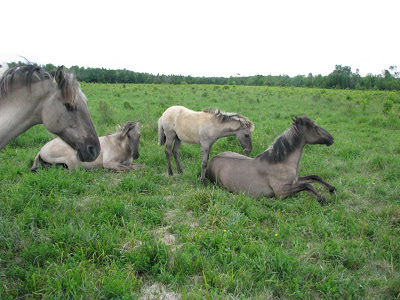 And now some images of Altamiro (Lord of the stallions!) and all those boys: 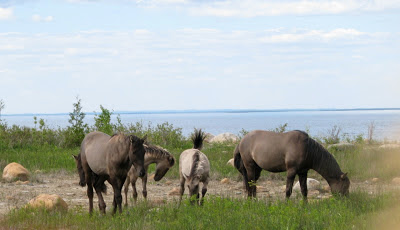 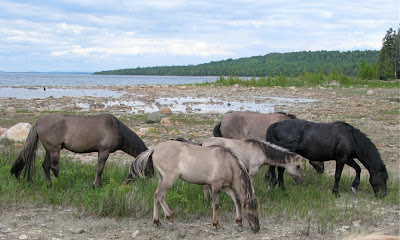 Altamiro is not just Lord of the Stallions, there are two draft mules to keep an eye on - Jerry and Doll. (Doll is the only female left, but much as she wishes for it, Altamiro has no amorous feelings for her.)  Also Altamiro oversees the domestic Thoroughbred gelding Zeus and also Ciente's two gelded sons, Interessado and Silvestre: 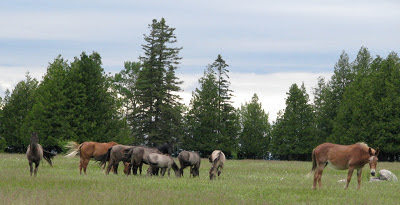 For his part, Altamiro has been wonderfully accepting of the removal of his mares.  Perhaps even...relieved?

He is much more mellow now, gets along well with his herd of males and who knows...he and some of the other stallions will perhaps enjoy learning some at-liberty haute ecole dance moves with me as a partner?

Though I miss that feeling of having a "wild" family band living here at Ravenseyrie, and I feel acutely the hole the absence of the mares and fillies leaves, the "gentle haunts" woven into the landscape still and probably always will resonate with their essence - from this I take a bittersweet comfort.  Though I have shared with you my sadness over the loss of Ciente and the absence of the mares, be assured I have not shut off my ability to find beauty and happiness in the changes to the Ravenseyrie Sorraia Mustang Preserve.  I remain receptive to all the new things this transition will be unfolding...and I will be sure to share them with the readers of this blog.