Fascinated by Animals and Wild Places


More than a year has gone by since the mares of the Ravenseyrie Sorraia Mustang Preserve have been living a life apart from their band stallion Altamiro and their male offspring.  While I seem to still be having difficulties adjusting to the situation, the horses have all adapted marvellously.  Both the males who remain with us and the females dwelling on the Twinravens range have fluidly developed seasonal routines and habits that harmonize with their similar - yet different - wilderness environments here on Manitoulin Island.


I confess, it continues to sadden me that insufficient interest and support for wild horses worldwide means we can no longer devote our Ravenseyrie Sorraia Mustang Preserve to an autonomous family band, however I take great consolation in witnessing how well these "Iberian Tarpans" enhance (and are enhanced by) their wilderness settings as separated gender groups and I remain deeply thankful that Mark Seabrook and Michelle Hrynyk are enjoying having our wild mares inhabit a portion of their land.

Mark and Michelle share their Twinravens property not just with wild mares, but also throughout the year play host to a great number of friends and family looking to escape the hectic cityscapes for the more pristine, slower-paced atmosphere Manitoulin Island is so well known for.  To give readers an example of how meaningful such great escapes can be for city folk, I'd like to share with you the experience one of Michelle's long time friends had during a visit to Twinravens this past August.

"In our increasingly urbanized lives, we still remain fascinated by animals and wild places.  A recent survey of 20,000 people in Britain to find the top fifty things they wanted to do before they died discovered overwhelming interest in wild places and animals."
-Jules Pretty


Emily Veryard has long admired the mares and each time she has stayed with Mark and Michelle, she makes a point to take her walks to key places where she might catch a glimpse of them.  I will let Emily's own words tell the story from here:


I had my coffee and Akina with me for a walk. I was super excited that I had snagged an opportunity when people were either all still asleep or at work to find some solitude. Not because I am a solitary person but because it felt right to have that on the island every once and a while. I saw the ladies (mares) a fair distance into the field, and talked to them for a bit. Hahaha, they were way less interested in me than I was in them. I've been fascinated for a really long time at the power of voice and song - how connection and pathways can open when someone sings. I thought at the very least I might entertain the mares with a few of my lullabies. I began to sing some songs from my 'babysitting' repertoire, and the girls just responded immediately. Akina 'trotted' them in, leading the way, and it just seemed super natural for them to respond so easily. I, the city girl that I am, was super excited, but I managed to recognize that there was a very grounded connection being made through expression and trust. I trusted the mares enough to show them my voice, they were willing to return the favour with their visit. Fascinating how animals can understand that exchange.

Haha, I guess I just continued singing for them since I didn't want to leave them without a bit of a gift - a show of gratitude for coming to visit me and keeping me company that morning. :)
--Emily Veryland


Emily was so delighted to have this experience with the mares she made the hour's drive from Twinravens in Tehkummah up to my Ravenseyrie Art Gallery in Gore Bay just to tell me about it and show me video clips she had taken on her iPhone.  Emily's enthusiasm was so infectious,  I have pieced these video clips together and with her permission am sharing them with the readers of this blog.  The "selfie" photo she took shows how much joy she felt to have the mares come up close to listen to her sing.  And what a lovely voice she has!

I have come to know that wild horses that are not persecuted and harassed by humans have an abiding desire to connect with us.  This is astonishing considering that mankind's history with horses saw them chiefly as prey to be hunted and later as creatures to enslave as "beasts of burden".  Wild horses have tens of thousands of years of biological memory that knows humans as ruthless predators and abusers to be diligently avoided.  Even today, equine exploitation abounds in various ways all over the globe.  Horses are raised for meat, drug companies are force-breeding specifically for the extraction of estrogens from pregnant mares' urine and the manipulation of horses for humans' sport and pleasure activities is a multi-billion dollar industry.

But not every human treats the horse as a commodity and there are countless numbers of told (and untold) stories of friendship and partnership with equines.  Deep in the psyche of the horse, wild or domesticated, given the right situation, curiosity and the desire for closeness supersedes fear and mistrust...and the heady sensation of making friends with horses is all the more fantastic when done on their terms - not in a box stall, or a round pen but in the wide open free spaces.

Reflecting upon Emily's experience and the joy it brought her to be able to simply be in the presence of the wild mares - not expecting anything from them other than to share a moment in time on a rain-soaked summer morning, reinforces for me that the preservation of these horses and the dedication to make wilderness habitats available to them so that they may live in as much freedom as possible is not just essential to the equines' well-being, but also to the well-being of humans. 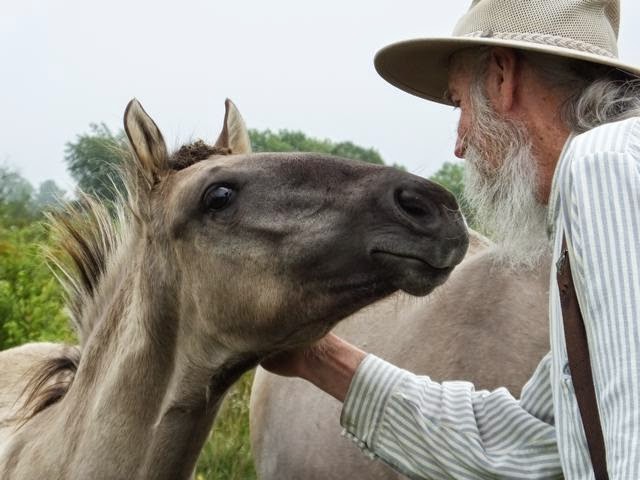 "A relationship with horses in freedom entails discovering a piece of your own freedom, too."  -Imke Spilker