Since the mares of Ravenseyrie were relocated an hour's drive to the landscape in Tehkummah  presently owned by Mark Seabrook and Michelle Hrynyk,  I have been fortunate to devote one day each week for visiting these beautiful Sorraia Mustang horses in their new environment.  (Click on the map below for a closer view of the location of Ravenseyrie on the North Channel of Lake Huron compared with where the mares now are at Twinravens, down near the village of Tehkummah on the southeast section of Manitoulin Island)


Having reopened my Ravenseyrie Studio & Art Gallery in May, throughout the tourist season, I  worked six days a week and reserved Mondays as my one day off.  How eagerly I looked forward to what Kevin and I soon called, "Mare Monday"!

After tending to morning chores here at Ravenseyrie, I would pack a lunch, gas up the Jeep and head down to Twinravens (the moniker Mark and Michelle use not only for Mark's art studio, but also for their exquisite homestead) crossing the Manitou River and pulling into the yard generally before noon.

Most often the mares (and Bella's 2013 colt, Ousado) could be seen clustered in the middle of their range, on high ground, where the passing winds and visual advantages were optimum.  This choice - especially on those days that were oppressively hot and plagued by the horse-blood-hunrgy-hoards of hungry green-eyed-flies - was from my human perspective very perplexing, as I would have expected the mares to seek out one of the many shaded sectors of their environment.  During one of my earlier visits in June they were clustered under a lightly shaded area, but ever after that, they were devoted to that high ground which they had turned into a bit of a dust bowl, aiding in their means of coping with the plague of biting insects during the heat of the day.

What follows are a series of photos taken over the course of several Mondays, showing first the shaded midday dozing spot and then later the exposed dusty high ground hangout:

With the mares so often occupied with their fine art of swishing flies in the midday heat, there was little I could do save swish flies with them (with my horsehair fly whisk) and take odd photos.  Below is a series of such images as can be had when one angles her camera in dynamic ways: 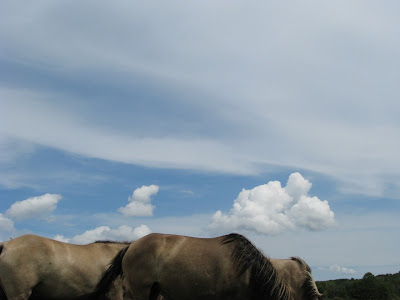 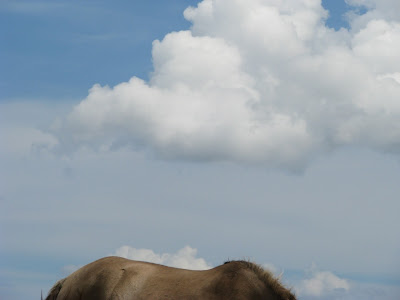 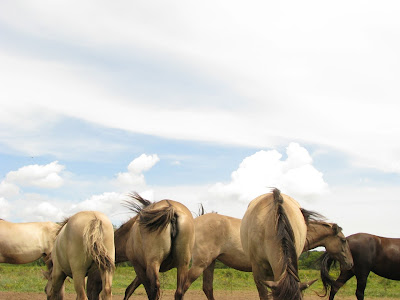 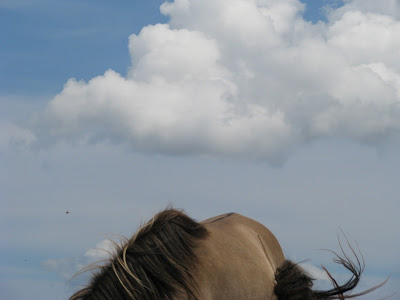 Obviously, I enjoyed the drama of those grulla gals juxtapositioned with the floating feeling of the summer clouds...I hope you can feel that wide-open floating feeling, too.

Each Monday when I go out to the mares, I bring them a bucket of treats...whole oats mixed with alfalfa cubes, which I lay out into many individual piles in the short grassy region.

Typically Ousado is the first to leave the treat site and come investigate me where I sit and observe the herd.  Often the young colt will play with the empty bucket.

I spend, on average I would guess about three hours hanging out with the mares before packing up the Jeep and making the hour drive back up to Gore Bay's East Bluff where the bachelor group of Sorraias remains living at Ravenseyrie.  Some days I would feel somewhat discouraged that my time with the mares was so limited, leaving me unable to observe and interact with the horses at different times of the day when they might be doing something other than hanging out in the middle of their self-created dusty loafing spot.  Mark came up with an idea for me...he invited me to come on a Sunday evening for dinner with he and Michelle and their daughter Jasmine and spend the night...I could hang out with the mares beforehand and also see them first thing in the morning.  Once Labour Day came and went, I changed to off season hours at the gallery, providing me with both Sunday and Mondays off and the very first Sunday off I took up Mark's offer and came for an overnight visit to Twinravens.  We had a lovely meal prepared by Michelle (her steamed beet greens tossed with fresh garlic and balsamic vinegar are a true delight!), sipped a full-bodied Shiraz and shared intriguing conversation by candlelight AND I was able to enjoy many extra moments with the mares!  The only thing that kept the evening from being perfect was that Kevin could not come with me...but was, instead taking on the vital role of keeping the animals at home happy and to their usual routines - something so important when horses, dogs and a cat are family members so dear!

To bring an end to this journal entry I will leave you with images of greeting the mares at dawn on Mare Monday after a good night's sleep in Mark and Michelle's spare bedroom, and an assortment of other photos from recent Mare Mondays.  Today is Sunday...which means that tomorrow you know where I will be!  Many thanks to Mark and Michelle for opening up their fallow land to a herd of "wild horses" and for serving as a secondary range for the Ravenseyrie Sorraia Mustang Preserve.   Next year, in addition to the other workshops and sessions Mark and Michelle host at Twinravens, we will be organizing walking tours to see rare primitive horses living in a wilderness environment.  Will post details as that venture progresses.