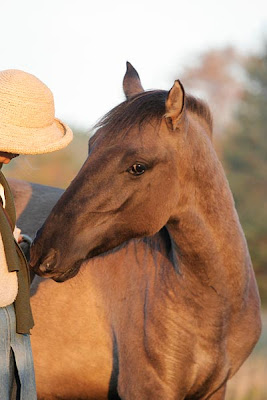 Altamiro/October2007 (photo: Leslie Town)
I know very little about the genetics of equine hair coat patterns and honestly find genetics to be way over my head in whatever capacity they are presented. This cerebral deficiency is likely a combination of my being an artist and being rather lazy-minded unless something really "speaks" to me, (or I could be a bit less self-deprecating and say that I'm not lazy-minded, rather prudently filtering out non-essentials). Let's just say science and mathematics don't connect the right neurons in my brain to spark the inspiration that fuels understanding.

Finding myself now part of a project to preserve the genetic treasure of an ancestral equine form as represented in the Portuguese Sorraia and in certain North American Mustang horses, I have had to acquire a rudimentary comprehension of the primitive color that is an integral part of these horses' phenotype. 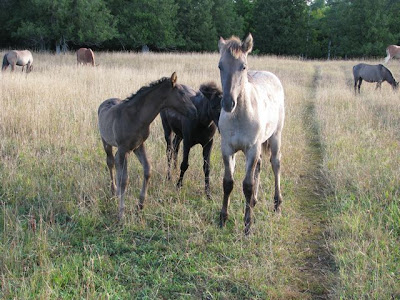 The half Sorraia half mustang foals, Interessado, Fada and Animado/autumn 2008
As I've shared in various articles, the Sorraia horse is a remnant specimen of the indigenous wild equine of the Iberian Peninsula. His coat color is always a variation of dun, with hues of creamy yellow, tan and buff or a version of dun referred to as "grulla" with ranges of soft greys of blue, silver and lilac or deep, sepia-toned charcoal. It's a color that alters with the seasons and with the play of light, but whatever variation of dun a horse has, it will always have a dorsal stripe and black lower legs. Other primitive elements are often present as well, such as a bi-colored mane and tail (lighter outer hairs fringing the interior black mane), shoulder and leg barring and two-toned ears. Some dun-colored horses, like the Norwegian Fjord, have lighter colored muzzles (mealy mouth) and lighter under-bodies. Sorraia horses, by contrast have darkened, "smutty" muzzles and faces and uniformly colored under-bodies. 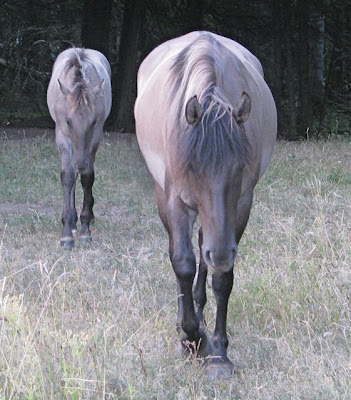 Animado with his dam Bella/Summer 2008
Dun is considered a dilution of either the base color of chestnut, bay or black. The dun coloring represented in the Sorraia is a dilution of bay base color or black base color and is often referred to as "yellow dun" or "black dun" respectively. Black duns are also referred to as "mouse dun" or "mouse grey", to differentiate it from the true grey found in other breeds. The Portuguese word for yellow dun is "baio" and for mouse dun is "rato". More commonly, mouse dun horses are called "grulla" (grullo/grulla is a Spanish word for a blue grey crane). Some medieval Iberian hunting texts described the wild equine of the area as horses which were "rat" colored with dark faces. Many versions of dun horses are represented in cave paintings in parts of Europe. 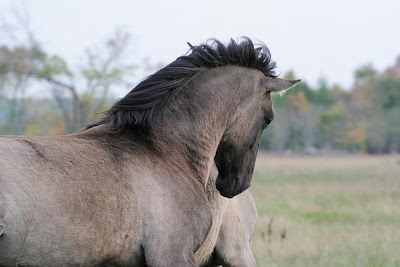 Purebred Sorraia stallion, Altamiro/October 2007 (photo: Leslie Town)
The Veterinary Genetics Laboratory at the University of California, Davis has been doing extensive research into color genetics and offers a variety of tests for horses, one of which is to determine "dun zygosity". The link for this test is here:
http://www.vgl.ucdavis.edu/services/dunhorse.php

Curiously, this test is not yet being offered for Iberian horses and the test itself is limited in scope as the specific mutation that causes the dun dilution has not yet been identified. At best it can discern particular DNA markers associated with the dun color and how many copies a horse possesses. Using these markers coupled with photo images of the horse being tested and a three generation pedigree, the test can give a pretty good determination of whether the dun gene is present or not. 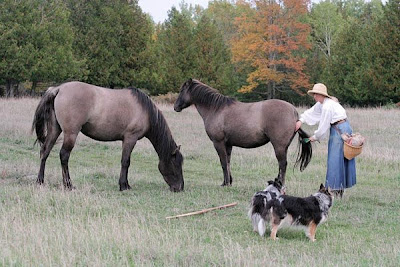 Bella and Belina/October 2007 (photo: Leslie Town)
Quite some time ago, it was suggested to me that I send hair samples from Altamiro to assist in this research of the dun gene. When I finally got around to connecting with Dr. Cecilia Penedo who heads the research team, Altamiro had sired three foals out of select mustang mares with varying degrees of the Sorraia phenotype. Dr. Penedo requested I send along samples from Animado, Fada and Interessado as well.

First, they completed a general "horse coat color" test. Altamiro and his three foals all came back with the same results: their base color is black with no other color dilutions except for dun. 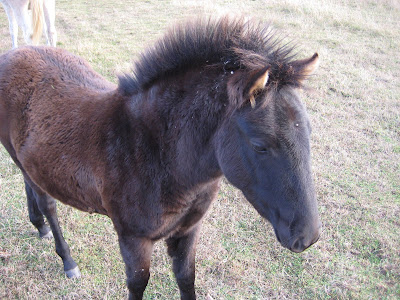 The half Sorraia filly, Fada/Autumn 2008 ( photo: Carolyn Haggart)
Next up, the "dun zygosity" test. I did not get any report back on Altamiro (have inquired but received no reply so far). One came back for Animado which lists him as D/D and says, "Horse is likely to be homozygous for the Dun gene. All offspring should be Dun dilute."

Later, I received a note from Becky Evans relaying that Fada and Interessado's samples were giving "unusual results" to the tests and asked if I would send along hair samples from their dams Belina and Ciente.

Interessado: Inconclusive 1 --Dun zygosity cannot be determined for this case.

Fada: Inconclusive 1 --Dun zygosity cannot be determined for this case.

Ciente: D/N --Horse has one copy of the Dun gene. Horse will transmit Dun gene to 50% of the offspring.

Belina: D/N --Horse has one copy of the Dun gene. Horse will transmit Dun gene to 50% of the offspring.

When I asked Becky what this all meant she relayed the following: "The results for Altamiro and his offspring were not clear cut for dun. Altamiro has an unusual combination of markers that we have not previously seen for dun. Fada and Interessado did not inherit dun from their dams, and both are unusually dark for horses that are dun dilute." 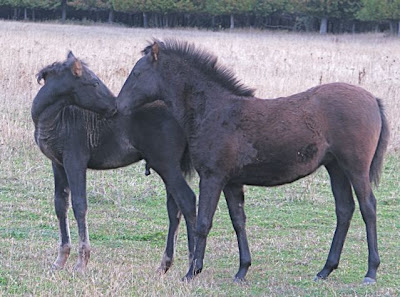 Interessdao and Fada/Autumn 2008
So, there it is, whatever it is! I'm still pressing for greater clarification and have been researching Altamiro's pedigree (which goes all the way back to the foundation stock d'Andrade gathered saving these indigenous wild horses from extinction) as well as those of Belina and Ciente.

Obviously, there is much more to be learned about the genetics involved in dun coloring. So far it would seem that Altamiro and his foals have shown that its a very complicated process, and testing their hair samples has not made things any clearer for the researchers--at least not yet. 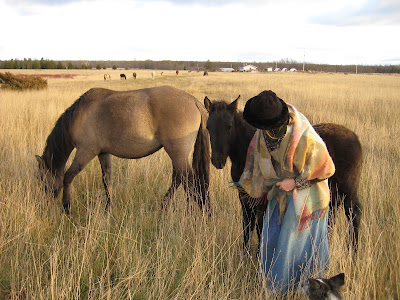 The author with Ciente and Interessado/Autumn 2008 (photo: Carolyn Haggart)
Posted by Lynne Gerard at 12:20 PM