On Radicalization and Rediscovery 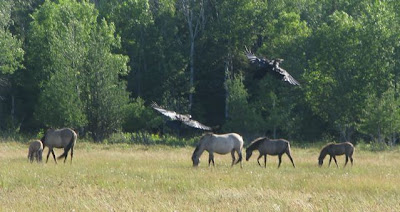 The Raven's of Ravenseyrie, keeping watch over their Sorraia Mustangs

Throughout today's dialogue, I will share some of the images of how beautifully summer is passing here at the Ravenseyrie Sorraia Mustang Preserve.

In a comment posted yesterday to the journal entry titled, An Article by Imke Spilker, a reader by the name of June wrote, "I have a new word - it's "spilkered"! It refers to someone who has been radicalized by coming into contact with Imke Spilker's ideas. I have been spilkered, and I don't know where it's leading me!!!"

I know just what you mean, June! 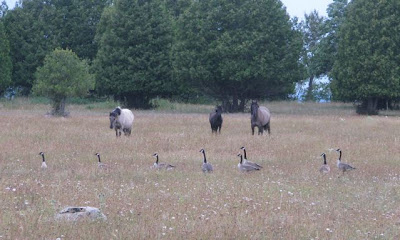 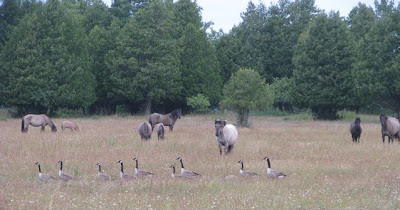 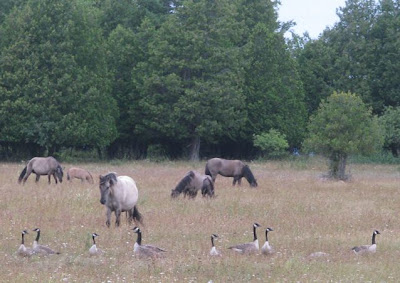 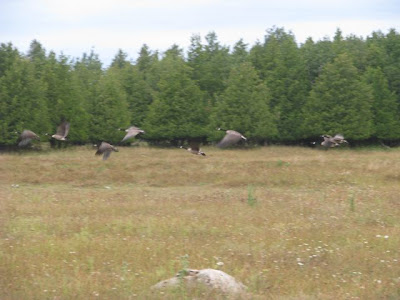 I had my first introduction to these truly unconventional ideas on horse/human relationships just after our first two Sorraia Mustang fillies were delivered from South Dakota. While they were considered "captive bred" horses, they nonetheless came from a situation not too dissimilar from the way horses live here at Ravenseyrie. From the very first, they let us know that in order to establish a good connection (which I consider to be relations built on willing engagement as opposed to force and coercion), we would have to follow a very different path. These fillies, Bella and Belina gave us our first hint at how much more can be accomplished by allowing the horse all possible freedom to "escape" our influence and express their feelings about whatever we might be asking of them.

As mentioned in two prior journal entries (here and here), the work of Klaus Ferdinand Hempfling, Carolyn Resnick, Alexander Nevzorov and especially Imke Spilker further radicalized me. Like June, I'm not precisely sure where it is leading me--this radicalization of thought and action in our relations with horses--but I have a nagging intuitive sense that it is not a "new" way of being with horses (although it may seem that way to us modern humans) rather, it is a rediscovering of how early humans used to interact with horses.

A photo sequence showing Belina and Encantara nibbling just the seed heads of the Timothy grasses: 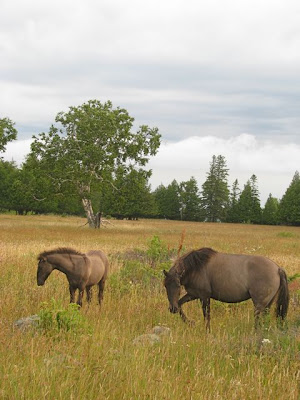 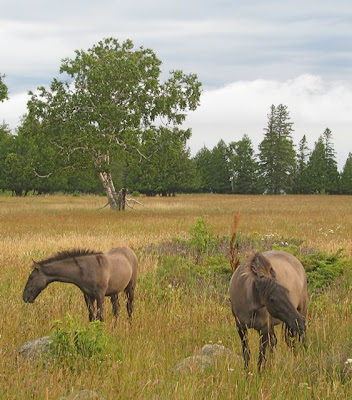 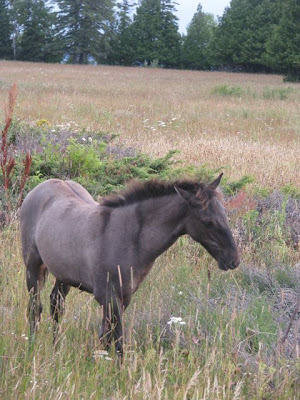 While I am not ready to write a detailed essay about it yet, let us just say that I feel it is possible that in prehistoric times, humans and horses had a very intimate relationship that was based on mutual understanding, reciprocal offerings of friendship and a complete lack of violence. How do you like that for a radicalized statement!!

June's comment prompted me to look up the words "radical" and "radicalized" and I'm sharing here what my copy of The American Heritage Dictionary offers us regarding these words.

Radical: adj. 1. Arising from or going to a root or source; fundamental; basic. 2. Carried to the farthest limit; extreme, sweeping: radical social change. 3. Favoring or effecting revolutionary changes, as in political organization. 4. Of or designing a word root. 5. Botany. Of, pertaining to, or growing from the root.

Radicalize, radicalized: To make radical or more radical
A photo sequence showing my friend Nancy, on a recent visit to Ravenseyrie: 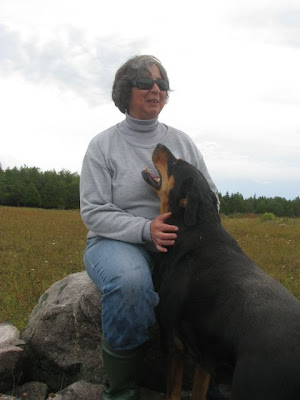 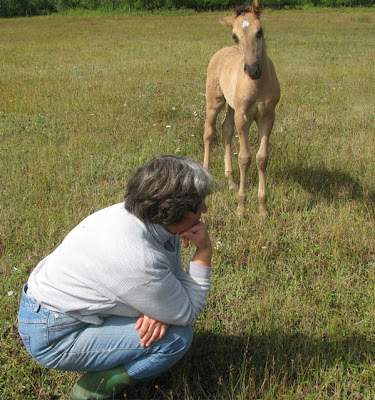 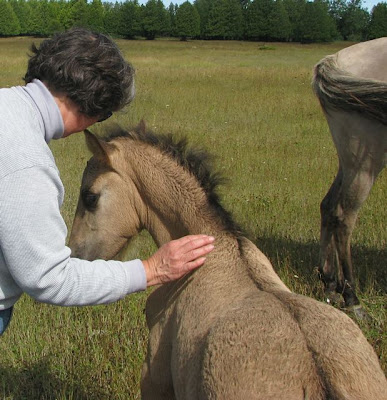 When we begin to appreciate the perception presented to us by deep thinking horse lovers, like Imke Spilker, we discover that we are going back to the root of things...the way perhaps the first humans and first horses began their relationships, as definition #5 relays, "Of, pertaining to, or growing from the root."

Animado playing games with my shawl over his shoulders: 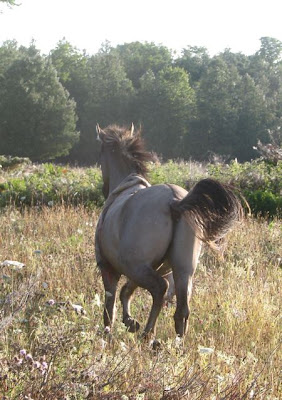 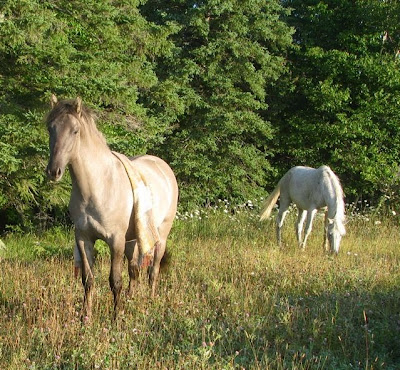 We have come to accept certain so-called "facts" about our prehistoric roots, which initially have humans consuming horses as food, and later brutally domesticating them for all manner of exploitation. But we don't really know that human's first encounters with horses were violent and based on gustatory predilections. Perhaps the killing for food and violent coercion of horses is a subsequent perversion of how humans and equines first lived together. Much of prehistory is conjecture and dependent upon the prevailing mindset that writes up the research, as such it is open to interpretation...and I'm choosing to interpret things from a "radical" perspective.

When our 2009 tourists season winds up here on the island and the slower pace of life returns, I will revisit this radicalized thinking and put together some of the research that has prompted me to reconsider the way in which first contacts between horses and humans may have occurred.

For now, I am finding it immensely exciting and personally satisfying to follow my intuition and look for the lamps of illumination being held up for me by other novel thinkers who are further along the path than I.

This photo is for June, who has been "spilkered" and is being lead back to the horses: 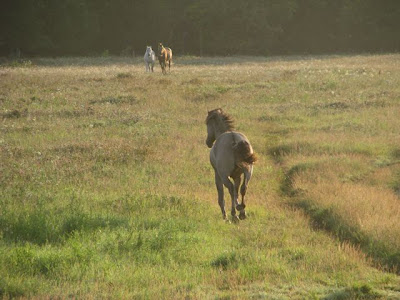 Mistral and Zeus enjoying a shady spot, away from the summer heat and biting flies: 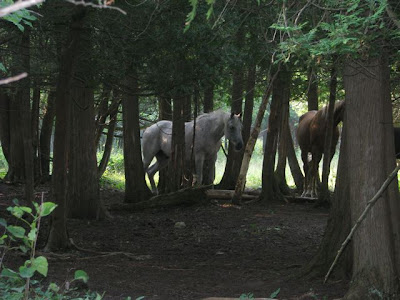 A short sequence showing Zorita, the half Sorraia mare who is due to deliver a foal by our purebred Sorraia stallion, Altamiro, on or around August 24th. Send her good thoughts for a smooth delivery and a healthy foal, won't you? 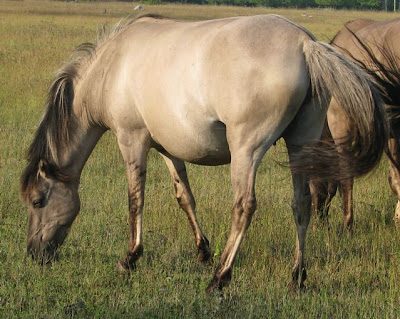 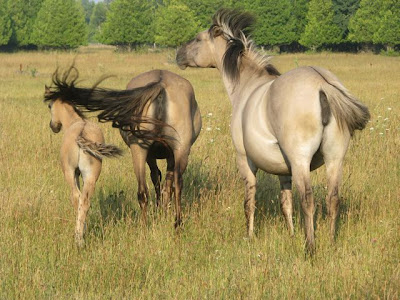 Zorita is so lovely.

Cant wait for Zoe to foal! Sovina a grandfather all over again! I went to see Sovina's last foal from the last breeding out of an Polish Arabian mare, I was surprised to see how much "Elvis" resembles of a Kiger Mustang of the Arabian influence side!

Sovina is scheduled to be gelded on Sept 23rd of next mth. Have big plans for him, the old saying a great stallion makes a great gelding!

Love the filly and the name fits her. She sure got Zorita's attitude just like her dam's half sister and her dam's mommy. Seems to pass on through Tia! Tia was one tough mare and wont take any BS.

Sovina is on UTube now, his first time at the beach.

Sadko G. Solinski investigated about prehistorical human-horse-relationship. He died a few years ago.

Norbert,
Thank you for directing me to Sadko G. Solinski. I have not been exposed to his work before. Seeing that he had many books published in German, I asked Hardy Oelke if he was familiar with any of the books. As it happens, Hardy personally knew Solinski back in the 1970' and 1980's but lost touch in later times.

So far, with what little I can find in English about him and from what Hardy relayed, I've not learned what he might have discovered in his investigations of prehistorical horse/human relationships.

If you have any clues you can provide, or experiences you'd like to share, I'd be most appreciative if you'd email me:
ravenseyrie@xplornet.com