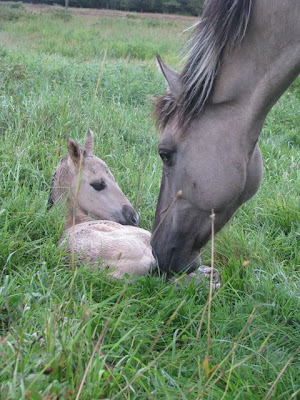 
When I checked in with Altamiro's family band this past Thursday morning, Zorita's udder had the telltale swollen tautness of essential nutrients at the ready. I thought she might deliver her foal later that day, or over the night. By nightfall, both Zorita's abdomen and udder were still full. Friday morning, I jumped out of bed, and while still in sleeping attire, I took the field glasses, ran outside and climbed atop the gate support to scan the western horizon where I could make out Altamiro's band in the dim light. Zorita is the lightest coloured grulla in our herd and easy to spot. When I focused the glasses upon her, I could see she had a light coloured form at her side! I went back into the house to get dressed and Kevin went out for a closer look at the new foal. By the time he got out there, the newborn was laying down, so Kev gave Zorita some alfalfa cookies and lavished praise upon her before returning to the house.

After giving the dogs their breakfast and quickly eating mine, I went out with my camera to welcome the new arrival. It was nearly half past six, the sun was up, humid, sticky air pressed heavily upon us and the flies were already an irritating presence. Most every photo I took was blurry, as the horses were constantly in motion, tossing heads and swishing tails against the invasion of the flies. 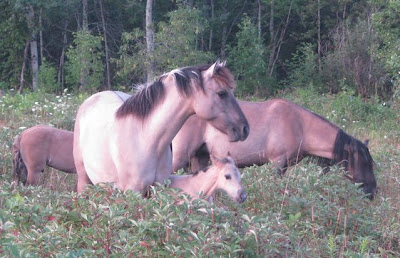 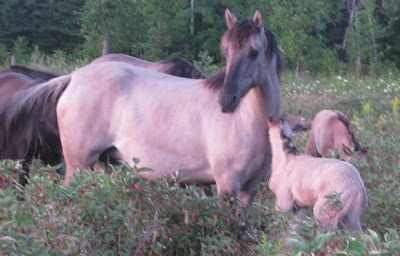 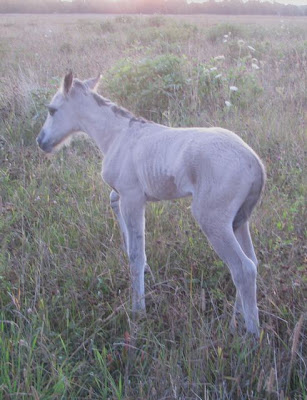 Judging by the look of the filly's navel, the cleanness of Zorita's hindquarters and the dry but not yet fluffy coat of the filly, I'd have to guess that Zorita delivered this foal sometime around 4 or 5 a. m.

Though it is extremely rare for me to travel out into the horse herds with treats in my pockets, Ms. Zorita knew that I had some for her and she walked directly up to me to claim them and receive her much deserved accolades for bringing such a fine, healthy filly into the world. I promised her I would visit with her again later in the day, and soon Altamiro directed his family off into the woods to outwit the flies.

By mid-afternoon, high winds and heavy rains came and while I was at work in the studio, admiring the vigorous dancing of the rain upon the lake, I worried a bit about how the new filly was handling such a torrent of chilly moisture so soon in her outside-the-womb existence. I thought about how most traditional breeding operations typically keep the mare and foal indoors in a comfortable stall for two to four days before turning them outside in a controlled setting. I wished to be up on the bluff, to see where Zorita and the baby were during this storm and I imagined them deep into the woods, protected from the worst of the elemental pummeling. I wondered if Zorita was missing the comfort of a barn, like she had with her first two foals, and for the rest of the afternoon, I was feeling a little strange--weighing the benefits of a snug barn against the tempering and nurturing that is so indiscriminately part of life in the wilderness.

Shortly before daylight was due to fade from the landscape, Altamiro brought his family up to the house for display and let them linger around here for about an hour and a half--something he hasn't allowed since he claimed his rulership over them earlier this spring. This made for some great photo opportunities, which I surely was happy to take advantage of. 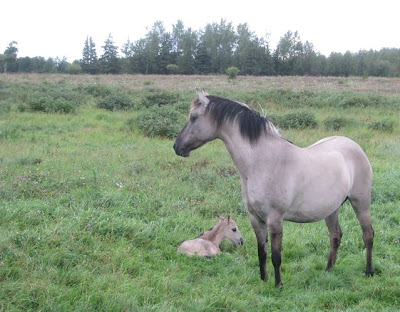 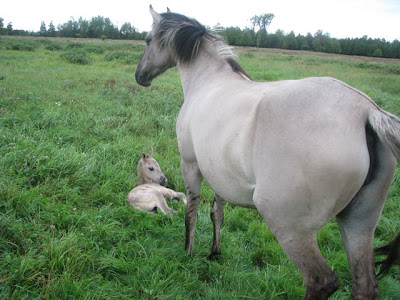 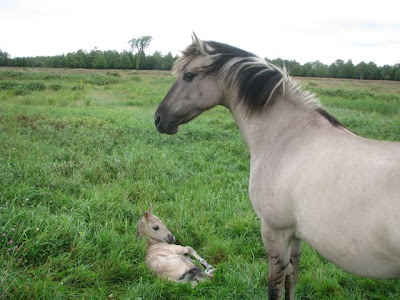 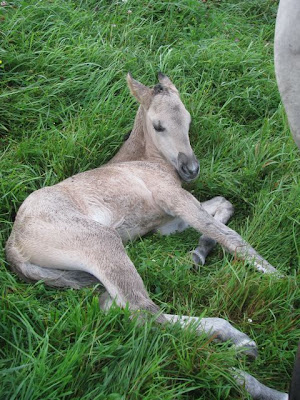 The wet, cool summer we've experienced this year on the island has given the landscape a prolonged verdancy and my eyes cannot get enough of the wonderful contrasts between that lush green carpet and the lovely grulla colouring of Zorita and this fresh-washed filly. 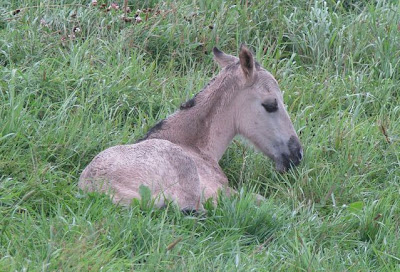 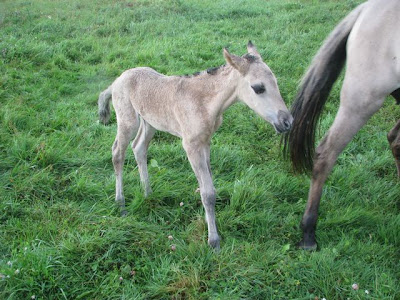 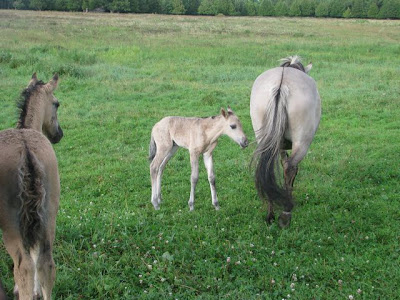 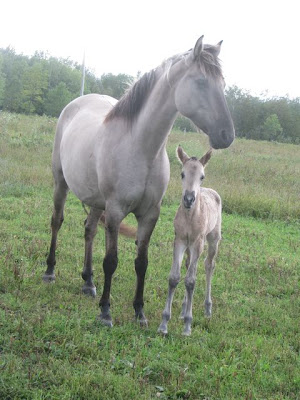 Kevin and I are relieved and thankful to have the last foal of the year arrive in good form and to see that despite the intense wind and rain over the afternoon, both mother and baby are doing extremely well. I am also delighted to see that Zorita feels confident enough to share her filly with us--which already came up for her first touch of a human's hand.

I took some wonderful photos of the other foals and Kevin mingling with them, but will save those for a new journal entry in a few days. I cannot resist however, to insert one now, showing the fine facial features of Silvestre, Encantara and Fada--each showing that aristocratic Sorraia profile inherited from their sire, Altamiro. Such exquisite beings! They swell my heart with beautiful sensations...these horses bring such depth and wonder to our lives here at Ravenseyrie! 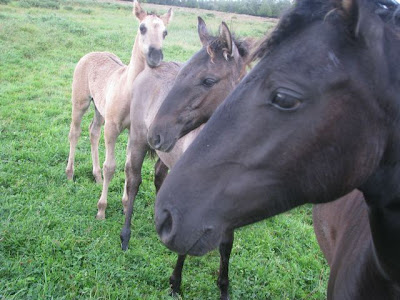 So beautiful! Congratulations on the new baby!

Welcome little one, you look like a bright little star to me.

Congrats! She is beautiful!